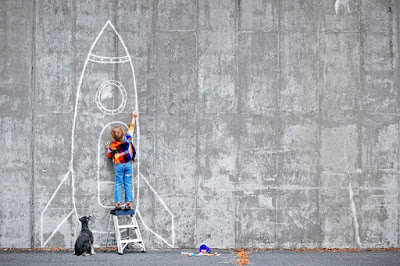 During
a dinner conversation with my wife, I was lamenting on my job. For the past few
years, job scope and responsibility have been pretty mundane and limiting. In
other words, stagnant! With the recent oil crisis, it is a double whammy. It is
not that I have lost drive or not willing to work hard. Yet, it really had to
do with the current company culture in limiting one’s ability to perform beyond
their potential. In comparison to the years prior, I was holding bigger
responsibility with accelerated work rate day by day. NOW, it is definitely
nowhere near even half of my true potential.
On a
brighter note, I am having less overtime and less pressure nowadays. As a
result, more time for my kids and seeing them grow. Besides, the big focus in
the last few years for me was really on personal development outside work. In
particular the much needed “Financial Education”. While the lesser workload was
seen as a blessing in disguise, it is no denial that career satisfaction is
still an extremely important element of a person’s life no matter how much you
choose to focus on life outside work. Well that is at least true for me!
I
told my wife “I am definitely meant
for bigger things in my life than this!

10 years ago!
My
wife recalled that a decade ago, I said the exact same phrase to her!
Deja vu!
At
that time, I was working in a small local company as an engineer. I did not
hate my job, because colleagues were helpful and bosses were really nice
people. Exposure was good as I travelled frequently. Furthermore I had ownership
of the entire project; from site survey, proposal, modelling, analysis, site
measurements to the eventual submission of report to the satisfaction of
client.
The
downside are the smaller project value at most up to tens of thousands, and maybe
also the people I dealt with were mostly engineers (like myself) or executive
level with no helicopter view. The site conditions can be harsh, dirty and even
risky most of the times. Above all, the thing to rant most was my troubled health
during offshore work.
So I took action and left.
Health
was a reason but not the driving factor. It was definitely not for money too. I
had no pay increment in the next company. Distance is way further from my home
also, meaning more to spend on transport. I guess
it was my GUT FEELING. Somehow I felt I was meant for bigger things than what
the company can offer me to do.
Bigger company, horizons expanded
After
joining a bigger local company with both local and regional offices and
factories dealing with clients globally, my horizon expanded. Projects were typically
valued from hundreds of thousands to millions. People I liaised with were often
either owners or management of a bigger organization. My communication and
interpersonal skills improved by leaps and bounds. Confidence rose and mind-set
changed! I learnt about business. I learn to see a bigger and more complete
picture. Internally, I also learnt how to circumvent interdepartmental politics
not to impress, but to get things done. Providing exceptionally good services
for my client and bringing value to the company are the main things in my mind.
Nothing
starts easy
It
did not turn out as smooth initially though. My new direct superior and
colleagues were not the friendliest. There was neither proper guidance nor
training. I was expected to perform miracle in things I did not have knowledge
on. It was like all, all your colleagues out there wanted to see you fail,
rather than to help! I was mocked so many times as a newbie and yet have to bite
my lips and gave an awkward smile. I did not even have my own personal email,
namecard and no internet access to speak of, only until after probation. The
hours in office were dreadful. At one instance, I felt so miserable because I
was tasked to do unimportant things including photo-stating for almost a week.
Imagine I was no intern, and not a fresh graduate.
The
turnaround
I
persisted the dreadful period for approximately two to three months! Things
took an unforeseen change. One day I met the founder of the company (the big
boss) in the toilet. He asked if I am busy with my work. I told him no. He was
shocked and said “how come?”
I told my big
boss I had nothing much to do and asked if he can bring me out to see customers
so that I can learn and do more. There were no hidden agenda on my part. I do
not know why I said that, but maybe it was just me.
The
same day, my big boss questioned my manager. My manager’s face turned charcoal black.
As expected, it turned out to be a really terrible day for me. It was all worth
it! It was the most important turnaround in my career. I was put under a new
superior later. Situation improved but the new manager was also selfish and I
did not learn much from him either.
Find good mentorships
The
good news was since then, I had more direct dealings with the two owners of the
company. My big boss brought me out to see clients who are at director levels
or owners of multi-millions companies. My second big boss also provided me with
so much guidance. More difficult tasks followed and pressures mounted. But it
was good. This is because as long as you work hard, you can learn so much more.
Good mentors are so important, but it is NOT always
there for you just as you wish. Many people think it is luck. I reckon you
ought to find or fight it yourself!
More
exposures and responsibilities
The
next few years my career exploded vertically. This was especially so, when my
bosses sold the company to much bigger global MNC. There, I was provided with even
broader exposures globally and assigned with heavier responsibilities. Of
course the route up the ladder was not as easy as I had to ward off much
internal resistance. This is typical corporate power struggle. Lest not forget,
the GFC made things difficult too and I was bedridden during the same period, a
result of overwork! Then again, life as a whole was
never easy. Pressure is always good. For as long as it does not crumble you
such that you can never recover, it is necessary for us to progress in our life.

Ignore the naysayers
Most
naysayers (not true friends) will attribute the “upward path” of others to
mainly due to luck and will NEVER probe further into it. These are jealousy and
man’s ego embedded in human nature. It often stifles one’s progress in life. For
me, I prefer to be inquisitive to find out the story behind the upward scaling
in life and learn from them. Give credits and learn! A person’s progress in
life often can be a combination of luck, opportunity, desire, hardwork and most
important of all, TAKE ACTION!
Rolf’s thoughts
Since
young, I always thought I am meant for big things in life. I thrive off better via
inspiration rather than obligation. I love freedom and flexibility in my work
which I always have in my working career. Call it “lucky or unlucky” – I do not
know! Lucky, because I had been enjoying most part of my career. Unlucky,
because that is why I am still an employee. Frankly, I may even do the things I
love for free.
You
can say that I am lucky to meet the right mentor.
You
can say that I am lucky to ride the offshore boom in the last ten years.
You
can say that I am lucky to be given more opportunity and exposure.
You
can also say I am unlucky because I am still an employee.
It
does not matter for I am extremely grateful today that I am equipped with
competences of: 1) “Engineering Education” background, a decade long of 2) “Sales,
Business and Management Experiences” and 3) Self-taught “Financial Education” expertise.

Ultimately
for me, it is somewhat the gut feeling that “I was meant for bigger things
in life!” which provides the impetus in my life. I will continue to evolve.
Hmmm…how abou the deja vu?
Tags: Career Personal Development

15 thoughts on “I am meant for bigger things in life than this?”