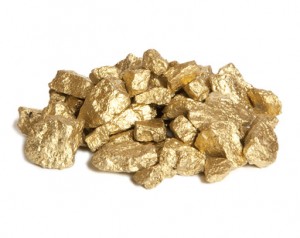 In the financial blogosphere in Singapore, there
are many articles on the gold and silver that I read before. Normally topics
are quite similar. It revolves around, reasons to own gold and silver to hedge
against inflation, as insurance for our stock portfolio in case market
collapse, returns of the precious metals and various instructions how to
buy the precious metals directly or indirectly.
In Part 1 (Refer
here), I also spoke about my experience of owning gold and silver as well as what
Warren Buffett and Ray Dalio think about the precious metals.
The blog article I have not read thus far is the history of the gold and silver. In this post, I shall peek into the history of precious metals (predominantly gold) and its impact on
the world monetary system. But before that, perhaps it is necessary for us to
know some interesting facts and definitions of currency, money, gold standard
and fiat currency.

1905 – US20 Dollar Note backed by 1 Oz of Gold Coin
During this
period, inflation averaged only 0.1 percent per year for US. Towards the end of
1913, the world economy was not in the best shape. Federal Reserve was set up
in US then with the authority to issue Federal Reserve Notes (now commonly
known as the U.S. Dollar) and currency was not backed by gold for a certain
period of time.

1914 – US20 Federal Reserve Dollar Note not back by
Gold or Silver
1914 to 1944 (Between WW1 and WW2)
In periods between the wars, many variations of Gold
Exchange Standards were used. This means that each unit currency is backed
partially by gold.
In 1914 during WW1 in order to finance
the War, many European countries were in deficit spending and have to abandon
or suspend the gold standard. Price levels doubled in Britain and US, tripled
in France and quadrupled in Italy.
It was only until 1925 that Britain repealed
the gold specie standard and created the British Gold Standard Act 1925 i.e. Gold Bullion Standard. Under this
standard, gold bullion is sold on demand at a fixed price exchange for the
circulating currency. Many countries followed Britain and return to gold standard.
The subsequent years were relatively stable but in deflation.
The gold bullion standard ended in 1930s,
when the Great Depression hit during 1929-1939. Sterlings were devalued by
speculative attacks then and forced Britain to abandon gold standard, so that they
can employ Monetary Policy to stimulate their economy. Essentially this means
increasing money supply and lower interest rate.
US flooded with gold
US participation of the two wars was
minimal in comparison to Europe. In WW1, USA did not participate in the war
until the last 6 months. During the WW2, USA real participation only came in
1941 when Pearl Harbour was attacked.
In contrast Europe took young men to
become soldiers. Factory were used for producing machines and weapons for the
war. Basically the entire economy was geared into war. As a result, Europe had
to purchase consumer goods from USA with gold and silver leading to flow of
precious metals into USA.
In 1943, USA national income was 142
billion double that of 1939 (71 billion). It was triple that of 1933 (46 billion).
By the end of WW2, USA has 2/3 of the world’s gold and rest of world has 1/3
and Europe almost has none. USA had also loaned huge amount of US$ to Europe
and Europe countries were flooded with dollars.
Therefore the world was flooded with
US$ while USA was so rich flooded with gold and silver.
1944 – 1971 (Post WWII)
After the war in 1944, due to the
inadequate of gold supply for reserve purposes, almost all major countries in
the world (United States, Canada, Western Europe, Australia and Japan etc) with
the exception of few met at New Hampshire to establish the Bretton Woods system.
The Bretton Woods System is a “Gold Exchange Standard” that most global countries’ currencies will be backed by US$ and US$ in
turn will be backed by Gold at $35 per ounce.
Essentially since the establishment
of this system, there is nothing known as Forex which gives the world
stability and low inflation.
Fiat Currency – 1971 and later
There is however a flaw in the
Bretton Woods system. No reserve ratio was established. So over the years that
followed, USA keeps printing money. This is almost inherent to human nature of
greed.
USA was in huge DEFICIT spending during
periods of 1960-70 when they were involved in Korea and Vietnam Wars, as well
as the launched of President Johnson Great Society programs. As a result, the
Americans expanded currency supply. During this time, USA has created 12 times
more dollars than they ever created before. US dollars loss its value and there
were insufficient receipts for gold. In other words, USA spent at the expense
of countries who were receiving the dollars in exchange of the goods and
services they sold to USA. This is truly a fraud.
In the late 1960s, France President Charles
de Gaulle soon realized that USA do not have gold to back the dollars. France
asked for their gold and from USA in exchange of the dollars back to USA. Soon other countries
follow suit. This resulted in a bank run on gold for USA in which she lost 50%
of its gold from 1959 to 1971.
Fearing that US will eventually run out of gold and go bankrupt, U.S.
President Richard Nixon ended international convertibility of the U.S. dollar
to gold on 15 Aug 1971.
Since 1971, international monetary
system was made of pure FIAT money which means currency not backed by the value
of gold, silver or other commodity. US hit double digit (13.5%) inflation in
the 1980, something that had not happened during gold standard which average on
0-1% per year over long term.

Today – US20 FIAT Dollar Note not back by Gold or
Silver
Since 2000
We
can also see that since the millennium, Gold has increased from around $280/oz
to a peak of $1,800/oz in 2011 before it settles around $1,200/oz today. This is an indication of how much Fiat Money has lost its value since the depegged from the gold standard. 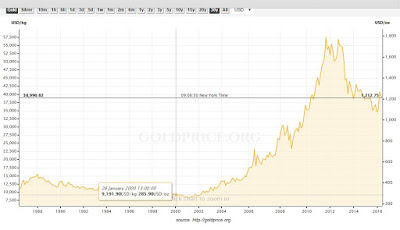 Objection to Gold Standard
A common objection to the Gold or
Silver standard is that there can be random demand and supply curves shocks to
the precious metals, thereby making the purchasing power of the metallic money
unstable. Nonetheless history proves otherwise. In 1849 during the California
goldrush, there were oversupply of gold globally, but the inflation rise in
about 8 years thereafter is only 1.5%. In fact later the supply of gold
contracted as the world output increase faster than the supply of gold. This is
known as “market self-correcting mechanism”.
Some blamed the Great Depression as
caused by the gold standard because of the lack of flexibility of central banks
to expand money supply! However there are other school of thoughts saying that
because of Britain abandoning the gold standard, credit or debts which were
already heavy in the 1920s went exploded in the 1930s and causes the eventual
collapse of the economy.
Many avid gold standard supporters
believe that the objection of gold standard was almost always because Federal
government were in deficit spending and needed to print more currencies to
cover their short-all.
Rolf’s thoughts
Sorry for the very long article
here. History can be boring if you are not interested.
However, often if a person can look further into the past, the further he or she can
look into the future.
This is also
because history of mankind often repeats itself, as human nature is inherent
since our evolution.
To summarize the world monetary
system went through several changes:
1880 – 1914 (30-40 years Classical gold standard)
1914 – 1944 (30 yrs Partial gold standard)
1944 – 1971 (28 yrs Gold exchange standard)
1971 – current (44 yrs Fiat currency standard …)
What will be next?
Tags: Gold and Silver Investment & Financial Literacy