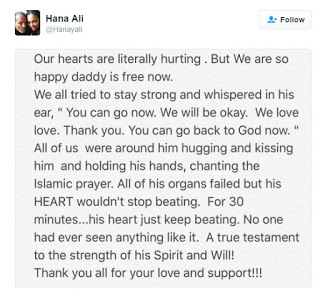 Boxing legend Muhammad Ali passed away two days ago at age 74. He
died of “septic shock due to unspecified natural causes”, his family
has said.

In the tweet below by Ali’s daughter Hana, it said

“All of his organs failed but his HEART wouldn’t stop beating. For 30 minutes…his heart just keep beating….”

I am quite a fan of boxing and Muhammad Ali is my all-time
favourite boxer. I had watched almost all his heroic boxing matches, notably
the Rumble in the Jungle with George Foreman and the Thrilla in Manila with Joe
Frazier.

And it was not just his boxing matches that I had followed. I also
watched so many youtube videos of Ali’s biography, his movie featured Will Smith and his intriguing interviews throughout
the years.

What impressed me most was not Ali’s boxing skills, but his
personality and how he evolved from a cocky young champion to man of wisdom and
compassion. His faith in religion is also admirable not just from the
standpoint of praising himself but to praise the lord he believed in.

Many people also do not know that Ali travelled to Iraq during the
Gulf War and met with Saddam Hussein to secure the release of American Hostages.

If you have time, below is a documentary of Muhammad Ali with David Frost who interviewed Ali countless times over a period of 30 years. This video used to be in Youtube but was no longer there. You can still watch it in the link below.

Muhammad Ali -Then And Now (Documentary with David Frost)

God Bless Ali and yes… his heart may have finally stop beating, but his legacy beats within my heart.
Related post
Know yourself and define your own success!
Tags: Muhammad Ali