July 29, 2014July 31, 2021 Rolf Suey
It’s Hari Raya public holiday yesterday and I decide to take additonal few days break from work to spend time with my family. This morning, I read an interesting offshore & marine article about and decide to share it here for those who may be interested. Below please find what I extracted and summarized from Rigzone.
Business for Singapore’s two largest
shipyards has been slow year to date, with the situation exacerbated by intense
competition from China.
Optimism generated by record
deliveries of newbuild jackups by Singapore shipyards in 2013 has faded
somewhat amid slow orders and a sustained challenge from lower cost competitors
in China so far this year.
China
Maintain lead over Singapore – More Jackups and Semi-submersible 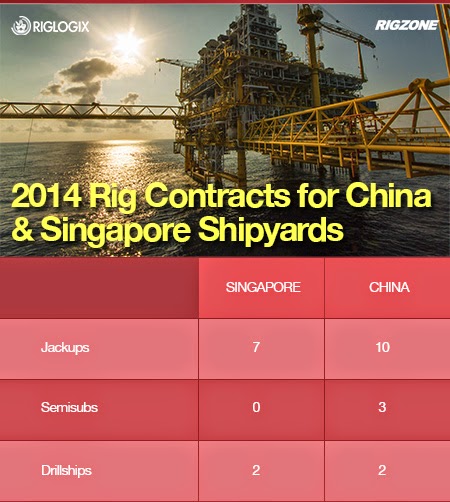 Source: Riglogix
Weaker
Rig Demand, 30-50% less than last year
The
weaker demand for new rigs was attributed to reduced capital expenditure
(capex) for exploration and production by major international oil companies
(IOC) such as Exxon Mobil Corp., Chevron Corp. and Royal Dutch Shell plc, as
well as a projected rise in supply of drilling rigs in the near-term, Carmen
Lee, head of research at Singapore’s OCBC Investment Research Pte Ltd. pointed
out in an April 10 investor note
Jackup utilization rate fell to 81.1
percent in June, compared to 87.3 percent in January, while the level for
semisubmersibles and drillships declined to 84.7 percent and 89.3 percent,
respectively from 89.9 percent and 91.3 percent in the corresponding period.
Long
term outlook still positive due to current Ageing fleet
Still, the current weakness in new rig
demand is likely to have an impact only in the near-term as global requirement
for new jackups is projected to increase amid an ageing fleet. At present,
nearly half, or 216, of these rigs are over 30 years old and “customers [are]
actively replacing lower-spec rigs,” Transocean Ltd. said in its June
presentation to investors.
Industry watchers mostly agreed, with
the existing slump in new rig orders seen as “only a temporary slowdown and not
a downturn in the sector as commodity prices remain firm and long-term sector
fundamentals remain sound,” Lee said.
Others believed that orders for new
jackups will grow as there is “replacement demand for aged fleet and stricter
safety requirements,” Singapore’s DBS Group Research Equity elaborated in a
July 14 investor note.
High
Rig Construction Cost discourage additional investments
Already, higher construction costs and
shipyard/equipment provider constraints were cited as factors that discouraged
additional investments in new jackups, Ensco plc mentioned in a March 25
company presentation. Below a chart showing the slowing in demand for Keppel and Sembcorp compared to last year. 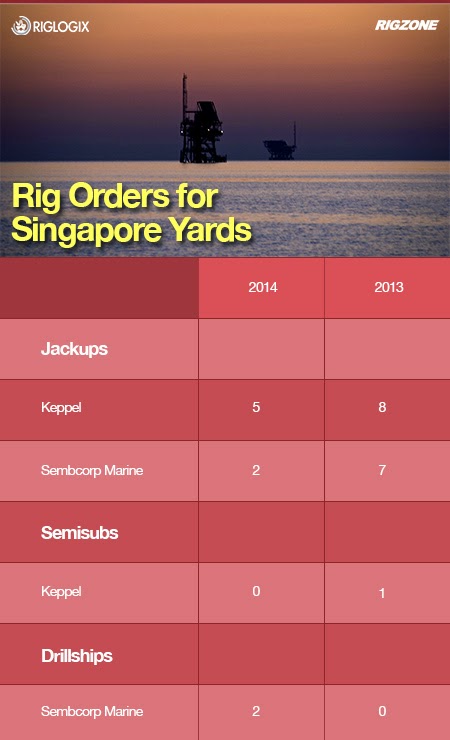 Keppel
and Sembcorp to move up Value Chain – LNG Game Changer
The two major Singapore shipyards will
undoubtedly attempt to boost their newbuild rig order books especially after a
relatively lackluster performance in the year so far. However, the situation
facing Keppel and Sembcorp Marine is currently exacerbated by fairly weak
demand for offshore fabrication work, such as ship conversion and platform
construction during the same period.
Keppel
Still there were some notable
contracts awarded to Singapore in the non-rig building segment. Keppel O&M
secured a $735 million contract to convert an
existing liquefied natural gas (LNG) carrier to a floating liquefaction vessel
(FLNGV) for Golar LNG Ltd.
Keppel Shipyard also received an order
from SOFEC Inc. to fabricate an external turret mooring system for a floating
production, storage and offloading (FPSO) vessel that will operate in the
Twenboa-Enyenra-Ntomme fields in Ghana.
Sembcorp
However, Sembcorp Marine did not win
any non-rig offshore projects this year unlike in 2013 when the company bagged
a $725 million contract from Norway’s Det Norske Olijeselskap (DNO) to build an
offshore platform integrated topside for the Ivar Aasen development in the
North Sea.
Better
prospects from NOCs
Business prospects for the two
Singapore shipyards could improve in the second half of this year as national
oil companies, unlike IOCs, are expected to maintain high E&P capex, which
is estimated at just over 10 percent.
“Oil companies still require short- to
medium-term production for cash flows, and as such demand for jackups remains
strong … Coupled with the ongoing bifurcation towards premium assets, there are
still pockets of opportunities for market leaders such as Keppel Corporation
and Sembcorp Marine,” OCBC’s Lee said in an investor note early last month.
Overall
prospects still bright
Looking ahead, Singapore’s offshore
industry hopes to continue growing the sector, which has expanded steadily in
the last three years. The rig building and ship repair/conversion segments each
contributed approximately $7.66 billion (SGD 9.72 billion) and $3.73 billion
(SGD 4.74 billion) in revenue last year.
Given that rig building remains a
dominant part of Singapore’s offshore sector, the focus has been on improvement
to the service offerings. Seen in this context, while “Singapore’s forte is in
jackups and semisubmersibles, industry leaders have taken a cognizant view of
the steady shift from semisubmersibles to drillship and have embarked on
drillship construction,” the SSSOID report highlighted.
Keppel FELS has taken the first step
with CAN DO – its first ever drillship built on speculation, while Sembcorp
Marine’s subsidiary Jurong Shipyard is now constructing two Jurong Espadon III
design drillships for Transocean Ltd.