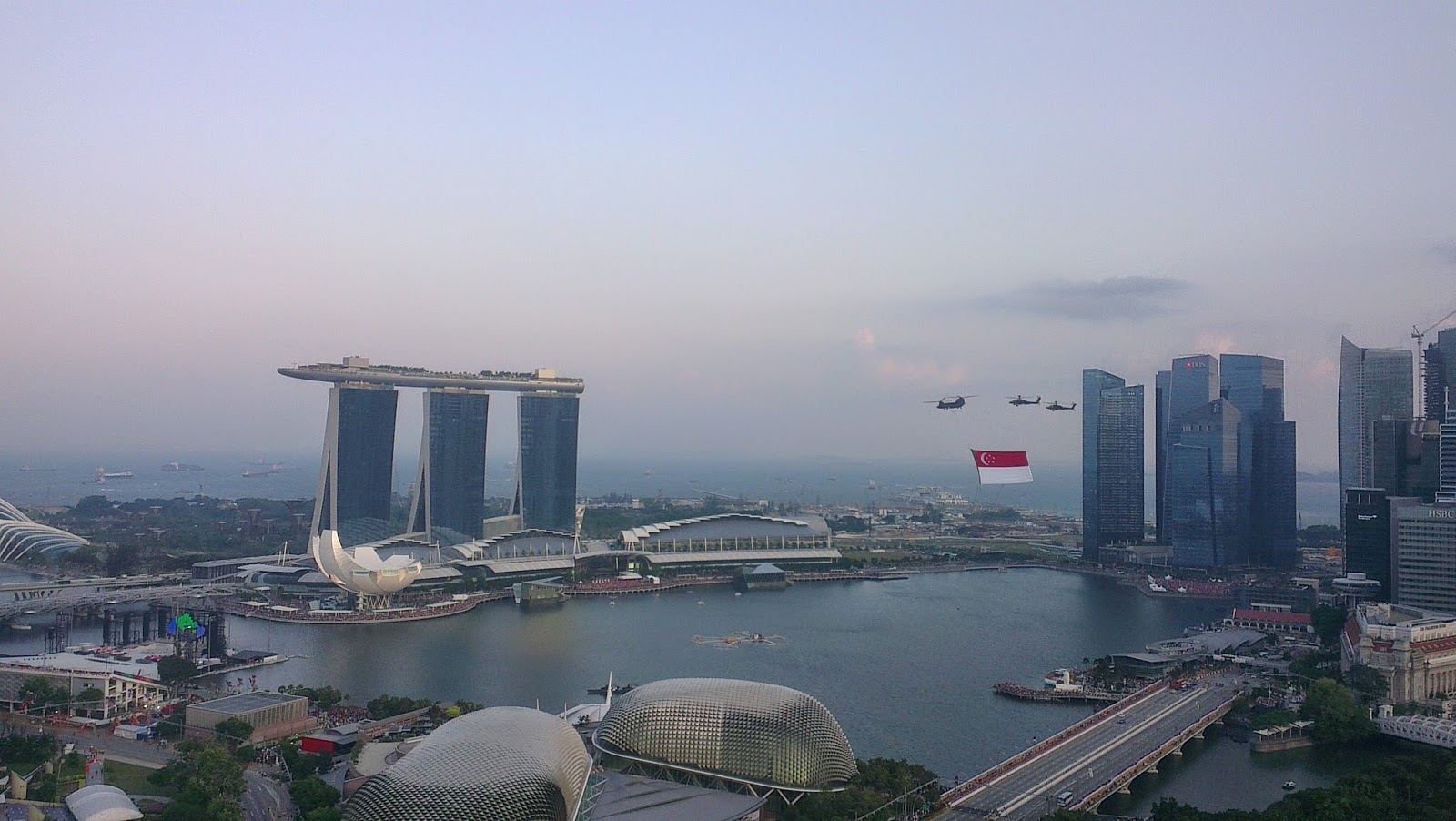 Which industries in Singapore offer the most lucrative jobs? This is probably one popular question most undergraduates or working adults are interested to know. After surveying many friends, most agree that in Singapore, the Banking & Finance sector is where the money are. The Oil & Gas Energy sector will probably settle for a tight second position.

LNG shaping the future of Singapore?

Few
months ago, I was talking to a friend and we concur that LNG industry may well
be the future for Singapore and become one of the most lucrative paying industry. I was told by my friend that one of his peers, holding a law degree gave up a high-position “steel rice bowl” job in government sector to join a private
LNG company as business development executive recently.
I also remember
last year during a chat with a long-time client, we agree that while Singapore
is successful transforming ourselves into the global offshore oil and gas hub, the
industry is lacking technical expertise among Singaporeans. In
the past, our government overlooked the importance of oil and gas technical
education, be it in school or in work. Today, many senior technical positions
in the oil and gas industry are still filled by foreign expertise from Europe
or America, although Singaporeans are generally savvier in commercial and
project management.
In
fact, my client who has business association with Pavilion Energy, a Temasek portfolio company focused on global
LNG supply chain, told me that Singapore is having ambitious and long term
plans in developing Singapore into the global LNG hub. This time round, Singapore
will also spend more effort focusing on education and upgrading our
human resource expertise earlier to prepare for our long term plans in the LNG industry.

Pavilion
Energy was set up in April 2013 to tap growing LNG demand in Asia. Since
then, the firm has invested US$1.3 billion for a 20 per cent stake in three gas
blocks off Tanzania in East Africa. It’s committed capital now has also been
raised to US$6.9 billion from its initial start-up of US$1 billion.
Earlier
in June this year, Pavilion Energy signed a US$7b deal with French oil company
Total to increase its LNG supply portfolio by 40 per cent over an earlier
10-year deal with France’s Total to 0.7 million tonnes of liquefied natural gas
annually, with shipments starting in 2018.

A month prior to the Total supply
contract, Pavilion
Energy and BW Group entered into an
agreement to form a joint venture, BW Pavilion LNG Pte Ltd to acquire, manage
and charter maritime LNG assets, including LNG carriers.  The JV is
hitting the ground running with an existing LNG
carrier, and will build two new ones at a South Korean shipyard, with each said
to cost around US$250 million.
“As the Ukraine crisis reminds us, we
should not depend on pipelines to access affordable gas. So this LNG shipping
JV reinforces Pavilion’s intention and determination to be a leading regional
LNG player, and to bring reliable and competitive gas to Singapore.” –
Pavilion CEO Seah Moon Ming
What is LNG?
So what exactly is LNG?

LNG is
liquefied natural gas comprises mainly of methane
(CH4), a clear, colourless,
non-toxic liquid that forms when natural gas is cooled to -162ºC (-260ºF). This
shrinks the volume of the gas 600 times occupying less space and easier to
store and ship out, safely and efficiently using LNG carriers.
Natural gas is a major source of
energy, but many towns and cities that need the energy are located far from the
gas fields which make transporting of gas by pipeline costly and impractical.
In the LNG process, the gas is first
extracted and transported to a processing plant called LNG train where it is
purified and then cooled down in stages until it is liquefied. LNG is finally
stored in storage tanks and can be loaded and shipped by LNG carrier. When LNG
carrier reaches LNG Terminal, the imported liquid is then returned to gas at the
regasification facilities. After that, it is then piped to homes, businesses
and industries. 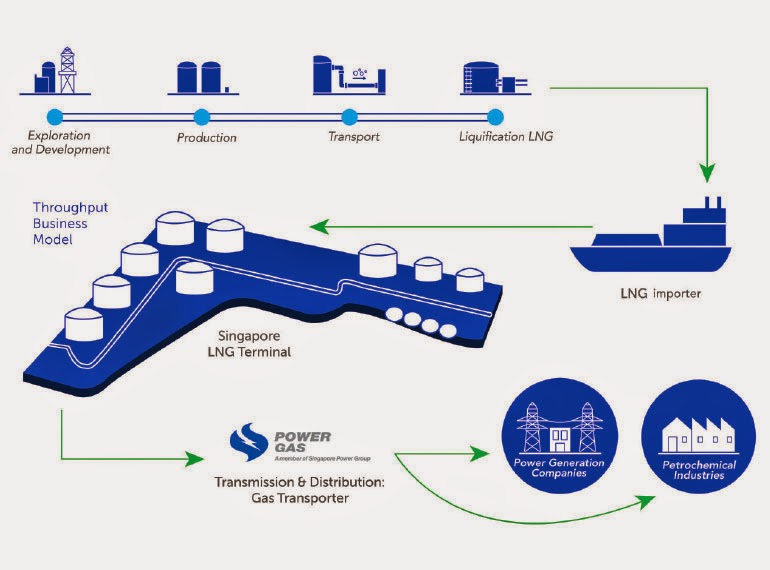 Source: ema.gov.sg
Why is LNG important to Singapore?

More than 90% of Singapore’s electricity is currently generated from
natural gas as fuel. They are
supplied by four pipelines from Malaysia and Indonesia, according to the Energy Market Authority. About 20 percent of the country’s natural gas
needs is from LNG, according Singapore LNG Corp (SLNG), which operates the Jurong Island LNG
terminal. Singapore
imports liquefied natural
gas (LNG) from various countries across the world. In 2008, UK-based BG Group PLC won a contract to supply 3 million tons of LNG to Singapore annually over 10
years starting 2012.
“Singapore is trying to take advantage of its geography and stature as
Asia’s oil-trading center to also become a leader in LNG. Asia has overtaken
Europe as the world’s biggest gas importer, accounting for 46 percent of global
trade, according to the International Energy Agency, which cites Singapore as
best-placed to be the hub for liquefied natural gas” – PM Lee
Southeast Asia’s gas demand will
rise 184 billion cubic meters by 2018, up about 19 percent from 2014 levels,
compared with 11 percent growth in global consumption, the Paris-based IEA
estimated in its medium-term gas report in June last year. China’s
needs will also increase by 56 percent to 294 billion in the same period. As at end 2012, Asia accounted for 71 percent of global LNG demand.
Singapore
first LNG receiving Terminal
In 25 February this year, Singapore
witnessed the opening ceremony of its first LNG Terminal in Jurong Island,
seven years after the decision to build the facility with an S$1.7b budget. The
40 hectare terminal with three LNG storage tanks, two jetties and
regasification infrastructure will be owned and operate by SLNG.
With the new terminal, Singapore has
capacity to handle 6 million metric tonnes per anum (mmtpa), which is three
times as much as what Singapore currently consumes. A fourth LNG tank is scheduled for
completion by the end of 2017 and will increase the Terminal’s capacity to at
least 9 mmtpa. The current LNG terminal can
accommodate as many as 7 tanks with a total capacity of 15 mmtpa. 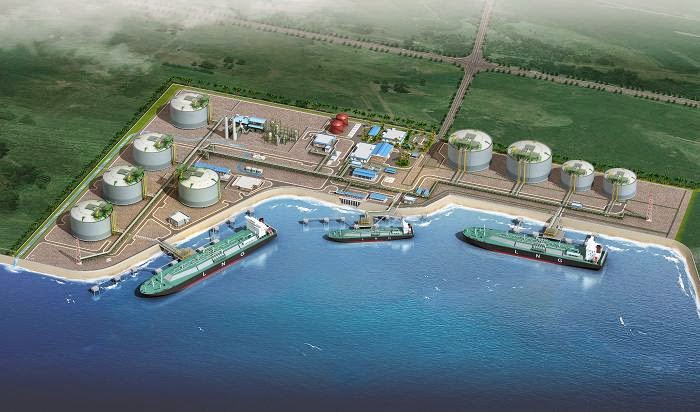 Source: Singapore LNG
Corporation Pte Ltd (SLNG)
Plans for second LNG Terminal
Singapore also plans to build a
second LNG receiving terminal. The second facility will likely have the same
maximum capacity as the first, and could possibly be built on a floating
facility offshore. The second terminal is for long-term planning and estimate
to be operational only from 2025 to 2030.
With the current terminal, it is
more than enough to meet our country gas capacity. The reason for opening the second
terminal is likely to take advantage of our geography and stature as Asia’s
oil-trading centre to also become a regional leader in LNG.
“We are preparing for the possibility that our demand for natural gas
may one day be met entirely by LNG,” PM Lee said.
The second terminal may be used for reloading and ship bunkering rather
than just for imports, said Leigh Bolton, managing director of Holmwood
Consulting Ltd., who has 20 years of experience in natural gas and LNG.
Keppel and Semb Marine ramping up LNG contracts
Elsewhere, Keppel has
early this month announced a US$735m contract to convert the “Hilli” LNG tanker
into a Floating Liquefied Natural Gas (FLNG) vessel for Norway Golar LNG. The contract comes
with an option of converting two additional vessels.
Earlier June this year,
Sembmarine announced it had acquired 12% stake in Norwegian LNG terminal and
platform maker Gravifloat
for US$4m,
with a right to increase its stake up to 20%.

On the same day, it also
announced that it had secured a long-term contract from GasLog LNG services to provide ship
repair, refurbishment, upgrading and other marine services for the latter’s
fleet of 20 LNG carriers. This means Sembmarine can anticipate refitting of
three to five GasLog LNG carriers each year.
FLNG Shell Prelude
FLNG refers to
water-based LNG operations employing technologies designed to enable the
development of offshore natural gas resources. The FLNG market is relatively
new but a very important development within the LNG market. There are no FLNG facilities currently exist. The world first FLNG vessel
– Shell Prelude FLNG is ordered by Royal
Dutch Shell in 2012, currently under construction at South Korea’s Samsung
Heavy Industries. When completed in 2017, the vessel will theoretically
produce, liquefy, store and transfer LNG (and potentially LPG and condensate)
at sea before carriers ship it directly to markets. 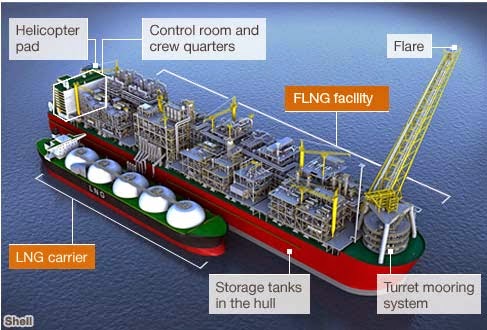 Shell Prelude FLNG measure
around 500m in length (~4 soccer fields length), weighting over 600,000 tonnes
(~6x weight of largest aircraft carrier) and expected to produce at least 5.3
mmtpa of liquids including 3.6 mmtpa of LNG – enough to satisfy the natural gas
needs of  city size and population of
Hong Kong. The vessel will be bound for the Prelude gas field, about 200km off
Australia Northwest coast.
Rolf’s View
It is no doubt that LNG will
be one of the most important industries shaping Singapore future economical
outlook.

If an opportunity arises, I definitely hope to a part of the LNG
working industry one day, if not, probably my children will fulfil my
aspiration if they possess passion in the industry.
Before you start thinking of switching industry to the LNG sector, please first understand what is LNG from the Shell video below. 🙂
Tags: LNG Oil & Gas Pavilion Energy