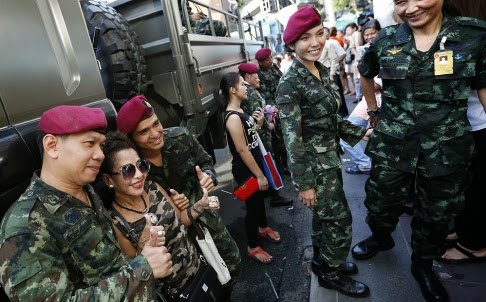 Thailand continues to face challenging
outlook since military seized power last month. Tourism is badly hit and
uncertainties arise in political and economical situation. 1Q14 economy
contracted 2.1%. GDP 2014 growth estimate ~1.5-2.5% (2.9% in 2013). It will
take some time before the new military government can introduce a general election
and civil rule to stabilize the situation.

The martial law could well be a temporary
solution to resolve the economic calamity cause by the prolonged
anti-government protest.  New leader
Prayuth need to prove that he can help support the economy better and has spoken
to Bank of Thailand about unveiling measures to support the economy.

Thai Baht has been very resilient
hovering between 32-33 against USD since start of the year, and not expected to
drop going forward. The positive economic trends Thailand enjoyed before the
coup could return since the country has large middle class and a growing
consumer population. The integration of Mynamar, Cambodia and Laos into the
global economic system can also benefit Thailand in the long term given its
proximity to these countries.

The short term market volatility is
quite unlikely to disrupt company operations. Many Thai corporations also have
historically managed to overcome the political upheaval and even thrive in
spite of them, proving the strength and resilience of the Thai people.


“We were unhappy, so I had to ask myself, `Can we let this continue?’ We
tried everything to resolve the problems through peaceful means. Nothing was
successful. What we are doing today is to try and bring everything back to
normal. We intend to return happiness to everyone.”

What it means for Super Group Ltd

In my previous post, I mentioned
about Super Group dependence on Thailand. See link here.
With Thailand civil unrest persisting
in the short run, Super share price had plummeted from high of S$2.48
(split-adjusted) to a low of S$1.38 today. Nonetheless, Thailand long term
prospect is still bright considering the resilience the country and its currency.
With Super strong fundamentals and Food Ingredient segment growth
opportunities, I am confident that Super Group earnings should recover over
time, and see its price and valuation improve.

South East Asia largest economy
is holding its presidential Election coming 9 July. So far it is a close contest
between Joko Widodo and Prabowo Subianto. 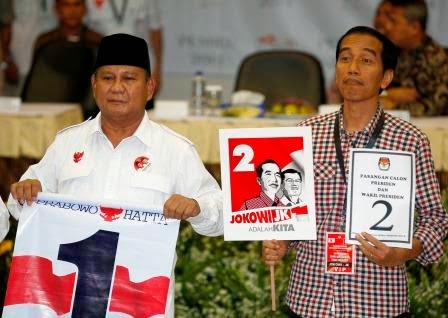 Jokowi is known to be economic friendly (can tell from the face above) and has exhibit
strong performance as current Jakarta governor. He has told investors that
he will pursue market-friendly policies and make bureaucratic reform and
infrastructure-building his priorities. Jokowi presented a pro-reform platform
for Indonesia as investment cools and the country faces hefty budget and
current account deficits. He also says “Investors should be given enough
room to broaden their investments”

Prabowo, is more a no-nonsense ex-general.
Although not as down to earth and economical friendly as compare to Jokowi, there
may be people who prefer his style as a strong and firm leader which Indonesia
need. Prabowo is a former son-in-law of Suharto and has the backing of the
country’s second biggest party Golkar led by tycoon Aburizal Bakrie. Bakrie is
a controversial figure in Indonesia business and political circles and
definitely not the most popular among many.

Indonesia’s stock market and the
rupiah fell on news that parties backing Prabowo won a slightly bigger share of
votes in the April 9 parliamentary poll than pro-Jokowi parties.

Rupiah Weakness in the Short Term

The interim political uncertainty
in Indonesia could place additional pressure on rupiah, one of the worst
performing Asia currency last year, as investors fretted over the country’s
current account deficit. Last year, Rupiah falls from 9,795 to 12,171 against
USD. Industry expert forecast it to be 11,800-11,900 against USD by end this
year. 2014 GDP growth for Indonesia is estimated at 5.6% a tad below 5.8% last
year.

What is means for Lippo Malls Indonesia Retail Trust (LMIRT)

Due to the weakness in Rupiah,
LMIRT share price had also fallen to low of 0.39 from high of 0.58 in 2013. Has
been supported at 0.4-0.41 for the past many months. The drop in price is
despite that real income actually improves (excl. ex.rate decline), reported in
the last quarter result. Considering rents in Jakarta is the lowest in the
region and Indonesia government is not going to have more malls due to traffic
problems, LMIRT occupancy rates should continue to be strong with potential
rent increase. Indonesia growing middle class and continue economy growth
>5% is also encouraging over long term.

For now, Indonesia fate seems
to depend on the results of the coming election.