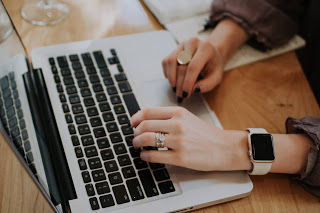 Earlier articles:
My Wife’s Company Ask Her to Take 50% Paycut – What is My Advice?

JOB APPLICATIONS
My wife sent a total of 15 applications via Linkedin. Most applications bring her to company websites of hiring companies. I told her NOT to MASS SEND her applications. Be focus on the relevance of her experiences to suit the company’s job description.
Also, it is better to apply for bigger and more profitable companies that can tide through the crisis. I will help her to analyse the company by looking at their websites or annual reports if available.
The sector is also important. Go for Tech, Financial Services or Real Estate. I feel that these are the sectors that have greater growth capacity. She is lucky in a sense, that her role in her previous company is able to transit across multiple industry, which helps.
THE INTERVIEWS
She attended 3 companies’ interviews.
I told her not to spend too much time keep attending interviews. Focus on 3 or 4 companies, then shortlist 2 to decide.
COMPANY A
The first interview was a local Tech Start up with less than 50 people. While it is a pretty new, it is backed by a financially strong investor. Because it is a smaller company, the interview was very informal (perhaps tech culture). Interview went well, and hiring manager is nice too. The only thing is he/she kept asking my wife to manage her expectation in terms of pay and benefits, stressing that they are still a small company and it is very difficult to compare to her previous MNC company.
My wife is eager because this is her first interview, despite a potential more than 25 to 30% pay cut. I told her to continue looking, and not settle for this first interview, because financial survival is still a concern for the company.
COMPANY B
Company B is her first application and interview was set up two weeks later. This is a Global Financial Service Provider who is the market leader in their sector. The role is 90 percent or more, relevant to her current job.
During the interview, she met with the hiring manager (a Director) and another Director. The interview went really well.  The hiring companies totally understand why she has to leave her current company and love the fact that her experience is very relevant to the position they are looking for.
After the meeting, the hiring manager expresses that he/she really like my wife to join him/her. Nonetheless, the company cannot confirm the offer within a short time, as it is company policy to meet with more candidates, before deciding. Further to that, the shortlisted candidates will require to be met and approved by the top boss. The hiring manager asked my wife not to confirm with other company and in a way give them the right of first refusal.
COMPANY C

This is the company she accepted the offer. Refer to Part 1.

This was one of her last applications sent. Within short time, HR personnel contacted her. The HR is very friendly. Interview with the hiring manager who is in another country was arranged within the same week as well. The salary budget the company has was also more than 10 percent higher than her current pay.
The meeting went exceptionally well. The hiring manager was extremely open and mentioned that my wife is by far, the most suitable candidate, and that they will not meet any other more candidate anymore, and will put up a proposal offer to her subject to approval by hiring’s manager’s superior.
The meeting with the hiring manager’s superior was set up within another few working days. The meeting was relatively ok, not too bad, but not as good, as my wife wanted compared to the last one.
While still recovering from the decent interview with the top boss, and with a bit dejection, the good news came a few work days later. The HR personnel called to confirm their interest telling my wife that an email offer will be sent to her the following Monday.
THE DILEMMA – COMPANY B or C
My wife faced a dilemma between Company B and C! She asked for my advices.
She preferred Company B, because Hiring manager is Singaporean and seems super nice. The environment is mainly local Singaporean colleagues, and very slim chance of being retrenched (as told), and the job is only local market, diminishing the need to travel.
However, I prefers Company C. This is because, it is more cosmopolitan which my wife is used to, and she excelled in it previously. Her boss is young and creative type, and easy-going, based overseas. The remuneration budget is higher without even negotiation, while Company B keeps telling her to manage her pay expectation, despite liking her.
Company C’s role is newer for my wife with 50 percent relevance, meaning, still a lot to learn, which I think is better. It is a more creative role with very little boundaries and it seems fun also, to be able to meet with clients together with the sales personnel. Quite the opposite, Company B’s role is almost 90 to 100 percent similar to her last job. It is a lot of tedious work, and frankly I prefer she not to come back home 2-3am again, like her previous job.
Anyway, we prayed for God’s guidance.
Meeting with Company B top Boss
During this time when Company C had signalled their offer, Company B called to arrange meeting with their top boss at the end of the week. My wife actually told them she is going to receive an offer coming Monday from Company C. The HR quickly arranged her interview to be on Monday. We appreciated her effort.
In the interview, Company B top boss was late. We reckon he/she is a Singaporean due to accent and the following statement, that left a very deep impression for me.
“In this job, you have to work long hours, and you have to “Bao-Ga-Liao” everything, are you ok with it?” – by Company B top boss.
–        “Bao-Ga-Liao” means “to do everything” yourself in Hokkien.
After the interview (Monday), the HR manager told my wife they will make the offer by Friday.
THE DECISION – COMPANY C

Both companies B and C are global market leader in their field with at least more than USD1 Billion profits. B in digital and financial while C in digital and real estate. Both companies hire thousands locally. B is more local culture, while C is more cosmopolitan. B is only dealing with local market, while C is a regional role including the need to speak Mandarin, since my wife’s bosses both cannot speak Mandarin. B is 90 percent relevant to her previous job that is very tedious, while C is a very new product here in this region with lots of creativity needed.
B is nearer to our house, with C another 15 mins more.
Company C adhere to their promise
On Monday, the HR from Company C kept her promise and sent the email offer. Although it comes late Monday night, but the HR already messaged my wife earlier explaining that she still need to sort out a few approvals, and she is travelling for that day, and asked for her understanding. This is a nice courteous gesture.
The salary was higher than expected. Wow….!!!

Company C’s HR also told my wife that she has helped to fight for a higher than expected salary! We were touched by the sincerity of just an HR executive. It speaks a lot about the company.
Company B did not adhere to their promise
On the contrary, Company B offer did not come by Friday as they have promised. And also without any message why it did not come as promise.  On top of not honouring their promise, I personally is also very disgusted by the lateness of the top boss, and the “Bao-Ga-Liao” statement liken to the Singaporean squeeze Singaporean culture. I also felt that they are a bit stingy.
Also, the whole interviewing to confirmation process takes so long, a typical of corporate bureaucracy. This is despite the hiring manager expresses firm interest and ask my wife to give them Rights of First Refusal of hiring. Eventually, I feel that the Top boss is overwriting hiring manager’s decision, hence the delay in choice.
Easy Choice – Company C
This breaking of promise, and overwriting hiring manager’s decision is super bad in my opinion.

Company C took within 3 weeks to confirm offer and within less than 4 weeks to have the contract sign. Company B, in their 7-8 weeks still cannot confirm their choice.
Furthermore, the official contract by Company C was attached with Company’s handbook for my wife to give her comments. This is unusually good, as most company will only show you the company’s handbook after you start work.
Not to say, the salary of Company B is more than 30 percent lower than Company C!
The choice is easy for us though. Thank God.
Tags: Career Family

7 thoughts on “My Wife Found a New Job – The Applications, Interviews, And The Decision! (Part 2)”