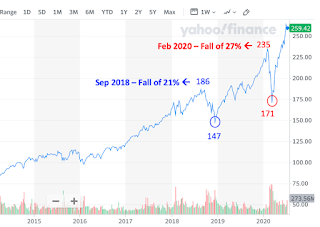 Tech Stocks is at All-Time-High (ATH) now! The Invesco QQQ ETF that tracks the Nasdaq 100 index is at a peak of close to 260. The last pullback was in March with a drastic collapse of 27%. Prior to that, was in December 2018 with a tumble of 21%.
Dilemma?
If you buy into Tech stocks now, you risk buying at ATH prices prior to a possible repeat of March plunge. On the other hand, if you wait at the sideline, there is also an equal chance that you can “miss the boat” if Tech sector stock defy gravity.
So, what should we do? Wait or enter now?

Source: yahoo finance
Disclaimer: Please refer to disclaimer here. This post is by no means giving advices to invest / not invest in Tech Stocks now. The purpose is to give readers different perspectives looking at things.

QUESTIONS
When it comes to making major decision, I always like to ask myself questions first. Next, I will do research and analysis to find the possible answers. At the same time, I will also consider what is the worst-case scenario so that I will not be overwhelmed by the pain that comes with the catastrophic events.
1.     Is it advisable to invest at ATH prices?
2.     Will there be a second-wave crash or will Tech sector continue to find high?
3.     What are the possible scenarios if you wait at the sideline waiting for crash?
4.     What are the possible scenarios if you invest now, and it crashes later?
5.     Will there be a repeat of Dot.com crisis?
6.     What Types of Tech Stocks?
7.     What is your individual situation?
In the 1st Part of this post, I will answer the first four questions. In Part 2, I will address the balance questions with a conclusion.

QN 1: INVEST AT ALL TIME HIGH PRICE?
Below is a table depicting Amazon, Apple and Google’s ATH stock prices within a period of time or within a particular year in the last fifteen years. For e.g. the ATH price of Amazon starting from 2005 to the year ending 2010 is USD183 per share. And the ATH share price of Apple in the whole year of 2018 is USD232 per share. 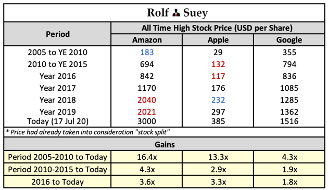 Referring to above table, for almost every period or year in the last 15 years, the 3 Tech giants had ATH price, that continues to rise in the following period or year, except on two occasions, where Amazon declined from 2018 to 2019 and Apple declined from period 2010-2015 to 2016. Even so, the decline of the ATH prices of the two exceptional cases are very minimal.
In a nutshell, even if you are extremely unlucky each time to have purchase either one of the 3 stocks at ATH price in the fifteen years, without averaging down, you will still enjoy tremendously good capital gain today.
Please however note that, I am not saying that there will NOT be a Tech Bubble Crash and that Tech Stocks will definitely continue to rise and rise forever. I am also not giving you crazy advice to always invest at ATH stock prices. What I am implying is that the usage of ATH stock price as a yardstick to ascertain that a company’s stock price is bound to collapse or pullback later, is definitely incorrect. Likewise, if a stock is at All-Time-Low (ATL), it does not mean it is always good to buy into the stock.
You have to look at the business fundamentals and future prospects. Finally, you have to decide for yourself what you see in that particular stock, if there is a great potential of future growth, or will the growth be limited.

QN 2: WILL THERE BE A SECOND CRASH?
Stop kidding yourself with all the answers. Nobody knows what will happen ahead of us? This crisis is different from all the previous crises. That being said, what is important is to always be prepared for both the good and bad situations.
To hedge in both good and bad events has always been my Motto in life. If there is a second crash, make sure first, you can survive in your own personal or family livelihood. Then, make sure you still have sufficient “bullets” to pick up good stocks at low prices.

QN 3: WAIT FOR TECH STOCKS TO CRASH?
You cannot time the market!
This tactic is great if the market really crashes again, and if you have all the guts and possess the perfect timing to invest in a rapidly falling market. It is not as easy! The truth is you can’t really time the lowest of the market. Even if there is a second crash, there is a high chance that you will chicken out again and continue to wait for a further plunge that may never happen.
How to tell if a Tech Stock is cheap or expensive?
It is very difficult to value a Tech Stock using normal valuation metric. Let us take Amazon as an example, with current stock price of USD2,961 per share, and below is the stock chart. 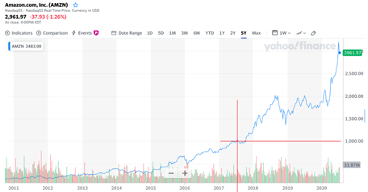 Source: yahoo finance
Amazon’s PE ratio is currently at whooping 141x. Refer to macrotrends here. Yet, there are more analysts predicting a further increase of price to 3,500 due to the fact that Amazon’s sales has been growing yoy of more than 25% (PEG ~5x), and there are still room to grow going into the future.
Base on quarterly PE figures in the last decade, there are more than half the time, when Amazon PE ratio is more than 150x, and yet the stock price continues to rise. In 2012 Sep, PE is 3633x and in 2013 Sep, PE is 1116.
Hence, at what price do you consider it a reasonably cheap price to enter? 2,500 or 2,000 or 1,500? Using PE, PEG? How to gauge? Many times, the market does not really value tech stocks logically using PE or PEG! Just look at Tesla stock. After-all, many are just using gut feeling to say that the price is high, just because it is at ATH peak.
Another good example is that in 2017 when Amazon crosses the USD1,000 mark at ATH, you probably think that the prices is already way too expensive, and waiting for a pullback or a crisis? You can continue to wait, but the price is not going to fall back to USD1,000. In fact, within three years, the price had tripled.
Invest progressively
My sentiment is that we should continue to buy shares, but in a progressively manner. The reason is because no one knows what will happen to the stock market tomorrow. Hence, we should not time the stock market exactly when it will hit bottom before deploying all in? Also, if you do not own any shares now, what if “Mr. Market” decide to go against logic and NOT retesting bottom, but continue to rally?  Then your zero ownerships of shares will have no capital gains. While buying shares is important, what is more important is to learn how to find good shares at reasonable pricing fortified with sound long term future. I will leave the type of Tech stocks to choose in a later post.
If I have excess 100K now, how should I invest over the next one year?

QN 4: INVEST NOW AND WHAT IF CRASH LATER?
Consider you choose enter into Amazon at USD3,000 per share NOW, and months later there is a huge second wave of corona crisis? If you look at the first wave of covid hit, the stock of Amazon took a beating from more than 2170 to below 1700 (fall 22%), but it rose to beyond 3000 thereafter.
In fact, a second wave may actually further benefit Tech stocks such as Amazon as more people continue to WFH and uses E-commerce more. Lastly, nobody knows if there will be a second crash?
Even if there is a pullback in pricing, if you keep sufficient warchest of cash, and have guts, you can buy at the corrected pricing.

ROLF’S THOUGHTS
While I am a firm believer of certain Tech Stock’s future, I hope you are not using my post as an impetus to invest blindly without using your own thinking and discretion, or without considering your own individual financial situation.
Please wait for my second post to find answers for the rest of the questions.
Tags: Alphabet Amazon Apple Google Tech Stocks US