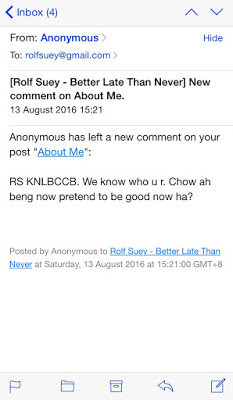 From a harmless and supposingly educational blogpost on Croesus Retail Trust from another blogger LP, refer here, one Anonymous reader gets agitated and accused us of “personal attacks.”

Seeing the injustice and unreasonable situation, we reasoned back. Especially me, who cannot stand injustice around, talked more. However all comments were well-reasoned and well-manner without any personal attack, let alone vulgar language.

Nonetheless, as expected when an Anonymous Coward run out of reason, he normally resort to harsh or vulgar comments without logic. So in LP’s blog, we were called “bastards”! Instead of retaliating with vulgar language, we apologised. The usual me added a bit of sarcasm.

So there you expect it, that coward Anonymous reader whoever he is responded in my blog “About me” page, vulgar comment.

This is the first vulgar comment in my blog after more than two years. I deleted it but that does not mean I am weak or I am afraid. But hereby, I print screen the page sent to my email by that Anonymous coward.

By the way, all I want to say is I am not afraid of speaking the truth, and it remains that I will never resort to vulgar language to fight back, nor any threatening tone.
Still, while that guy think that he is Anonymous, he forgets that if I really want to track, I will do all I can to track his IP address. If he comes again and becomes overboard, I will not just stay still. To rascal, sometimes you also cannot be too kind.
This is more or less expected when you becomes public, because there are just too many strange people around. But at least I am happy that it only happens after more than two years and the source is from LP’s blog. Haha…
Anyway, I still extend my compassion and apologies to that Anonymous reader whoever he/she is. Hopefully one day he can see the light!
Tags: Personal Development

17 thoughts on “The first vulgar language comment in my blog”