Rolf’s View of the World and Singapore’s Economy – Is Singapore over-leveraged? (Part 4)

August 21, 2016July 31, 2021 Rolf Suey
This post is one of the series of posts I written earlier relating to my
view on the global economy. In Part 1 & Part 2, I discussed about
the artificial harvest of the past and shared my views. Part 3 describes how the
entire world has been leveraging up in recent times. This article is an
extension of Part 3 which we turn our attention back home to see if Singapore
is over-leveraged?
Debt profile of Singapore
Public (aka Government)
Debt
Singapore has all-time high debt to GDP of ~105% recorded as of end
2015. We ranked top ten in world’s most indebted nation relative to GDP. U.S. sits
just below Singapore in the indebtedness ranking.
Surprised? 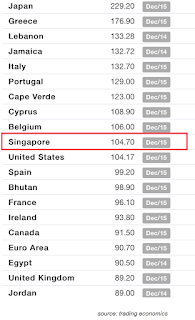 Over the last twenty years or so, our public debt to GDP ratio has increased close to 40% from a record low public debt-GDP ratio in 1994 at 66.9%
to the current level of more than a century percentage.

Total debt
If we include debt associated with non-financial corporate sector and
household, our Total Debt to GDP is a staggering 382% in 2014 and we are within
the top 3 most indebted nation in the world. Japan tops the list with a 400%
ratio. 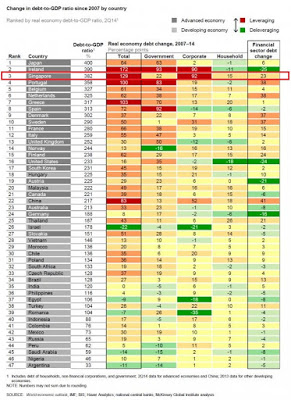 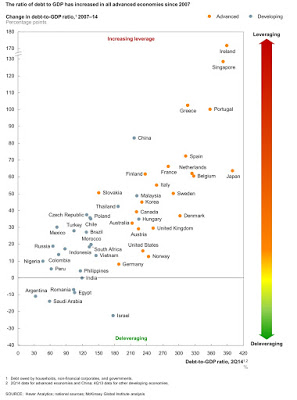 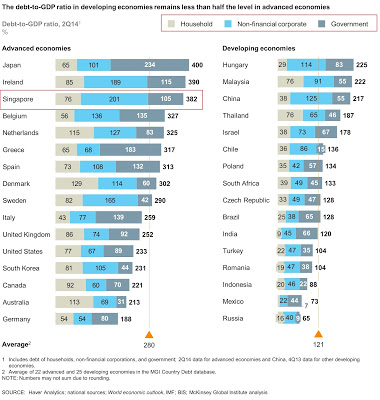 According to a report from McKinsey in Feb 2015, Singapore
had the fastest debt growth since 2008 only after Ireland. In particular, Singapore’s
corporate’s debt rapid growth had been nerve-racking and our household debt
incurred primarily via housing loans is one of the highest in the world.
That said, it pays not just scratching the surface, and instead, let’s
delve deeper.
Why high corporate
debt?

“For some nations,
an unusually high debt‑to‑GDP ratio does not signal imminent
danger. These are places
that serve as business and financial hubs. The high level of financial ‑sector and corporate debt
that results may or may not involve heightened risks. Singapore and Ireland, for
example, have tax regimes and other regulations that make them attractive for locating operations
of global corporations. The debt incurred by these entities is used to fund activities in
other nations, so its relationship to the host country’s GDP is not indicative of risk.

As a major
business hub, Singapore has the highest ratio of non‑financial corporate debt in the world,
at 201 percent of GDP in 2014, almost twice the level of 2007. However nearly two‑thirds of companies
with more than $1 billion in revenue in Singapore are foreign subsidiaries. Many
of them raise debt in Singapore to fund business operations across the region, and this
debt is supported by earnings in other countries. Singapore has very high financial‑sector debt as well
(246 percent of GDP), reflecting the presence of many foreign banks and other
financial institutions that have set up regional headquarters there.”

– Mckinsey Global
Institute Feb 2015 Report “Debt and Not Much Deleveraging.”
Why high government
debt?
SGS, T-Bills, SGSS,
SSB & CPF
Singapore government’s debts are in the form of security bonds. In
general, they are:

1)     Singapore
Government Securities (SGS) and T-bills to develop the domestic debt and active
secondary markets. It also encourages issuers and investors, both domestic and
international, to participate in the Singapore bond market.

3)
Singapore Savings Bonds (SSB) started on Oct 2015 that are non-marketable
SGS issued to individuals to provide them with a long-term savings instrument.

Above table shown
is as of March 2013 and excludes SSB.
No external debt
According to Singapore Ministry Of Finance, borrowings are
not for spending as Singapore operates a balanced budget policy and often
enjoys budget surpluses. Therefore the lion share of debts are in fact Central
Provident Fund Board (CPF) which is the main holder of these debts. This means government
borrowed the most from the people’s CPF, and has no external debts owing to other countries or private entities.
Investment returns
more than sufficient to cover debt
Singapore Government cannot spend the monies raised from SGS and SSGS.
All borrowing proceeds are therefore invested. The investment returns are more
than sufficient to cover the debt serving costs. As of 2013, this can be seen from  the
investment returns that are made available for spending on the
Government Budget – or Net Investment Returns Contribution (NIRC). Under the
NIRC framework, up to 50% of  the  long-term
expected  returns  earned
on  the  net
assets  (i.e.  assets
net  of liabilities)  are
available  for  spending.
The  NIRC  of
about  S$7  billion  each
year means  that  even
after  deducting  all
the  Government’s  liabilities
(including  CPF monies), the remaining
net assets produce significant returns.

Surplus returns belong to Past Reserves and cannot be spent by the
Government.
Strong balance sheet
The Singapore Government also has a strong balance sheet, with assets well
in excess of its liabilities. According to the 2013 MOF report, our S$396b
public debt also does not take into account the Government’s asset  position, which exceeds its liabilities, and
its ability to service debts through returns on its assets. Government’s assets
are mainly managed by GIC. The Government also places deposits with the MAS; in
turn, MAS as a statutory board holds its own assets on its balance sheet. In
addition, the Government is the sole equity shareholder of Temasek Holdings
(Temasek). Temasek owns the assets on its balance  sheet.

As Warren
Buffett once said “Only when the tide goes out do you discover who’s been
swimming naked.”

For our survival sustainability,  a lot have to depend on the next generation in the 90s/ millennials. I am no big fan of them, but let’s even hope there can be an awakening to change their mindset.
The thing that inflicts more concerns for the country I love TODAY is not just economically ….
In the past ……
As a boy in the 80s and 90s, I was always told by all my teachers that Singapore was well recognised by the world as the “Garden City” clean and green! Rarely heard that from kids nowadays. 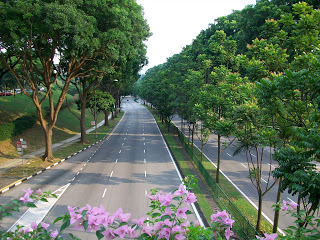 The two Lions that I am proud of, so prominent for all Singaporeans in the 80s / 90s! 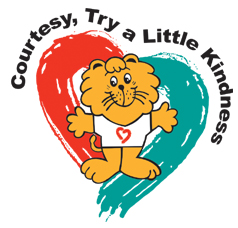 We are more proud of these man-made structures today. The kids are talking about it. 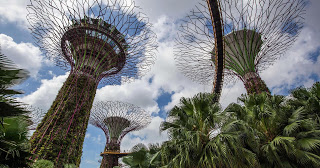 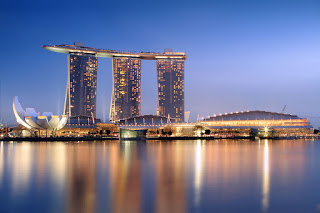 The landmark of Singapore to all tourists in the world is almost always – Marina Bay Sands!

Oooops …. didn’t we realise that the CORE of MBS is a casino or at the very least owned by an owner whose wealth were acquired via gambling business.

ok what? You really think so?

16 thoughts on “Rolf’s View of the World and Singapore’s Economy – Is Singapore over-leveraged? (Part 4)”