January 9, 2016July 31, 2021 Rolf Suey
On a Saturday morning today, I attended a half day seminar
– Invest Asia 2016 jointly organised by Maybank Kim Eng and Business Times. For
more about the seminar, refer to website here. It features Kishore Mahbubani – Dean and Professor of
LKY School of Public Policy, which is one of the reasons why I attended the event.
The Main topic:
THE
AEC: IMPACT, OPPORTUNITIES AND CHALLENGES
The
ASEAN Economic Community (AEC), encompassing 10 countries and more than 600
million people, is targeted to come into effect this year. How will it change
the region? What are its implications for politics and economics? What will it
mean for investors?
At S$38 (early bird), it is really a steal to have an
event of prominent speakers in a 5-star Hotel – Grand Hyatt, with delicious
good spread of breakfast, tea break, lunch and one goodie bag per person. 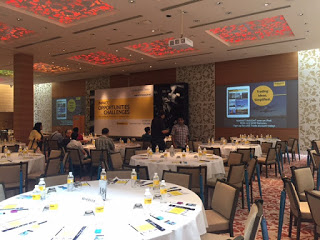 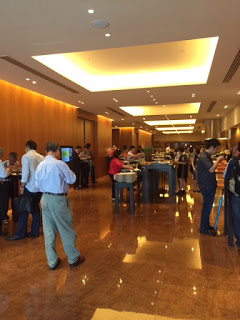 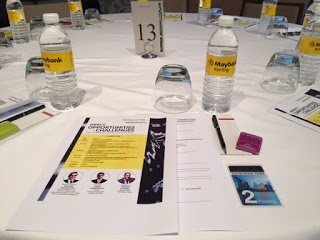 – ASEAN
the beast and the cow.
– Showing
some of the tremendous growth figures in GDP and Trade since 1970. GDP from
36bil to 2.6tril since 1970.
– Very
diverse and yet peaceful attributed to 4 letter words FEAR, LUCK & GOLF
(haha)! And also some great leaders of then, LKY, SBY, Mahathir.
– Geopolitical
calm of ASEAN.
– ASEAN
is surrounded by big powers, and yet relationships externally is managed really
well. If you compared to EU relationships with Russia, ME etc The key
difference is EU is getting increasingly complacent and more internally
focused.
– Emerging
middle class in ASEAN is crucial.
– Biggest
threat is the rivalry between numbering one rising power China and current
number one power USA.
– Biggest
opportunity is also competition between China and USA which will bring lots of “goodies”
to this region.
– Very
optimistic about ASEAN. Look at the track records of almost 50 years. It is
always good and moving ahead.
– TPP
is an extremely important partnership which Singapore will be one of the
biggest beneficiaries. If it is agreed, Singaporeans should open Champagne to
celebrate.
– Singapore
is playing a critical role for ASEAN success.

Sadiq Currimbhoy – ASEAN
Investing in a Volatile World
– 3 ideas : 1) volatile world of
today 2) less negative than a year ago 3) increase trade
– Corporate Junk bonds in grave danger, some of them partly due to oil price.
– China’s risks. Chinese
corporations borrowed exceedingly large US$ to fund internal growth over the
years, and the strengthening of USD is not doing any good.
– China has significant
overcapacity problems!
– The poor economic outlook in
ASEAN now, means opportunity in FISCAL stimulus from the government. And Asian economies had lot
of room for fiscal stimulus!
Singapore market stock’s valuation is low now.  Lots of opportunities. Possible downside of 15% before we hit low!
Great opportunities in Greater
Mekong Sub region going ahead : Cambodia, Laos, Vietnam and Thailand. Thailand
have low capital cost, Vietnam big beneficiary of TPP, and Philippines ought
to resolve infrastructure problems.
Technology is key driver in
ASEAN! Finding the ASEAN Alibaba, while building up the infrastructure
for connectivity! 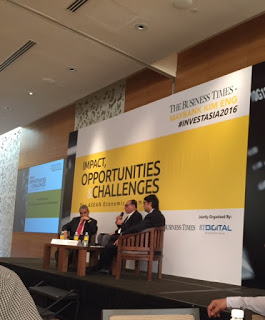 Questions and Answers
In my own words….
How to manage a rising China?
Kishore: History taught us that when a country is rising
to become the world superpower, we need to be very careful and do not get into
it’s way. It’s like stepping into the way of an elephant. Compare to when USA
was rising as a superpower many decades ago and their relationship with Latin
Americans back then, China growth is remarkably competent without disrupting
the geopolitical problems. Kishore mentioned that he had been invited by
Beijing to talk about the mistakes China made. He was never invited by
Washington to talk about the mistakes they made. It shown how incredibly fast
the Chinese is reacting and learning. Another good news is China’s abiding to the rules of World Organisation e.g. WTO, which the Chinese think that
by obeying, they will stand to benefit. Look at the Russians on the contrary.

What China slowdown means for ASEAN
Sadiq: There will be significant overcapacity, which
is deflationary in nature. The CNY will be volatile as capital flow is freezing
in the short term. The good thing is China has excess savings. And her one belt
one road initiative plus Chinese capital finding investment opportunities
outside China will be important for ASEAN. E.g. China overcomes the competition
of Japan to build the $5.5b fast train in Indonesia.

How to milk ASEAN growth?
Kishore: There will be seriously more
opportunities for youngsters if after graduating, go to places that is not so glamorous
such as Myanmar. They may fail once, fail twice and then learn to be eventually
successful with the abundance of growing opportunities in the next few decades.
Kishore is very sure that the streets of Myanmar after 20 years will be similar
to the streets of Thailand of today.

In view of economic conditions worsening one
day, risk of refugees (E.g. Indonesia) fleeing?
Kishore: More unlikely was the answer.
This is due to the resilient of the people in ASEAN who had gone through
tremendous hardship. And most importantly as long as their homes is intact
unlike in Syria where people are without home.

Sectors to Invest?
Sadiq: Look at the sector with scalable business
potential and cited that consumer products will still take the lead.

If Singapore is to Choose between USA and China?
Kishore: Either choice we are bound to
LOSE! Singaporeans need to be alert and vigilant. We do not want to support or seen to be supporting China or USA. We want to support Singapore!  Our choice has to be balance and firstly to
benefit us, and then we explain carefully and reasonably our choice.
Outlook for Energy?
Sadiq: Less optimistic for many years to
come. Ultimately demand elasticity for energy will reduce. He gave an e.g that many
years ago, driving an McLaren is amazing experience, but today, driving Tesla
at high speed through a bend, is incredible. Kishore agreed on the wonderful
experience for Tesla, since he driven one before! In addition, traditional oil
production of high fixed upfront cost, lower marginal cost will also be undermined by the Shale revolution where it is more responsive helping by the lower fixed upfront
cost, and higher marginal cost during production. Still, nobody can predict oil
due to its cyclical nature. The fundamental challenge for companies is those that borrowed too much money in the past to go long in the commodity space.

Indonesia – Jokowi before and after
Presidency?
Kishore: Kishore was once invited by Jokowi and was with him for hours. He was full of
admiration for Jokowi how he was so capable and popular in governing Jakarta,
personally attending to situations on the ground. Kishore was certain that he
is going to do extremely well after he was appointed, but he was wrong. After
becoming President, the best phrase to describe is “Baptism of fire!” The restraint
from politics and even with Jokowi’s own party, he has little control over them, not
to mention the entire country. It will take some time before he get into his
stride and things will recover and gain balance.

ASEAN’s opportunity?
50% optimistic. The most pro-AEC
(ASEAN Economic Community)  are
Singapore, Malaysia, Brunei and Vietnam who are in the TPP. Then followed by Myanmar,
Cambodia and Laos who are adjusting to this relationship. By far, Indonesia and
Philippines are least enthusiastic. There are fears that
Indonesia think that their local consumption is sufficient to drive their
economy? Kishore compared this to Brasil who favoured a closed economy.
Brazilian always think that they are the “Land of Tomorrow!” Today Brasil is still the land of tomorrow, and not current! In view of how porous today’s
world is, it is almost impossible to have a close economy to be successful. Indonesia
need to learn to compete in AEC which is like a “swimming pool” before able to
compete globally which is liken to be the “ocean”.
Rolf’s Final Thoughts

Today, Singaporeans have slight advantage over China as a commonly used bridge between the western and eastern world. Looking forward, this advantage is bound to shrink as we seen and know how fast the Chinese can progress. It is a matter of time when we or our Children will definitely be unable to compete with the Chinese in their territory anymore.

Therefore, in my views, it is crucial that Singaporean understand the importance of ASEAN to Singapore’s survival in the next decades to come. Not just understand, but prepare for it, and finally react to it in a positive manner.
From year 2007 and before to 2012, I had travelled/managed extensively SEA regions such as Indonesia, Vietnam, Malaysia etc. The last three years, my focus had been in China where I spent so much time there and luckily for me, also did obtain some small success. Now that China is slowing, and there exist re-organisation within my company, my focus is going to be ASEAN in the next 3 years. Not only can this focus be beneficial for my company, but also for my own exposure in this extremely important region of the future.