Sembcorp Buy or Not? – Ask Who?

December 9, 2015July 31, 2021 Rolf Suey
So much had been discussed lately on
Sembcorp lately, be it Sembcorp Industries (SCI) or Sembcorp marine (SCM). 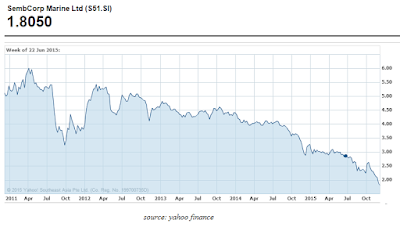 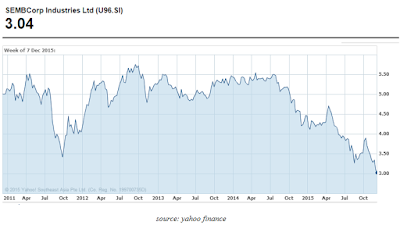 Both SCM and SCI stock prices are at their 5 year low.

Profit warning
The price decline is primarily after SCM issue profit warning on 1 Dec for coming quarterly result. This is at the back
of one of the worst oil crisis for decades which resulted likely in the lack of
new orders, potential terminations and postponements of existing contracts. SCI marine division owns ~61% of SCM. The marine division contributes ~>40% of SCI bottom line in 2014. If SCMis to suffer in profit, so will SCI then.

To buffer
the bad news from rigs cancellation from Marco polo and postponement from North Alantic Drilling, SCI had announced a couple of good news thereafter also. SCI utility segment has signed an MOA
to invest and develop a US$300mil gas-fired power plant in Myanmar and the
completion of Fujairah Water and Power Plant in the
UAE. Marine segment is also not all bad, with LNG dominating the headlines, after SCM announced record number of LNG repairs and upgrade over the years.

So when a
Temasek-owned Blue chip which had such impressive results over the years has
her share price start to tumble, investors’ hands will start to get itchy. And
ready to hit the buy button anytime?

Investors then asked – Is SCI or SCM cheap enough to buy or nimble?

Whether to buy or not, many will turn to indicators such as the oil price outlook or all the various analysis to get the so called intrinsic value. But can my question is are all these checks important when a company is inherent cyclical and largely dependent on oil price? It’s obvious that SCM’s plunged in share price/ profits is related to the plummet of oil price. Can you then predict the oil price? If not, how can you predict the earnings of SCM/SCI?
Perhaps the biggest reason to buy or not has more to do with yourself rather than the price now or the oil price forecast.

Remember: The biggest enemy is often yourself and not the forward outlook.

Earlier in Aug, I also blogged about why I am selling SCI at a hefty loss, although the price now is even lower. Refer here for the article.

Which
Directions Will Oil Price Head? What Should I Do Now?
Keppel
Corp – How Much Do You Know About Her O&M Businesses?
Oil Crisis – Did You See it Coming?
Oil Price Slump –
My Portfolio, What Approach & What Lessons Learnt
Why Singaporeans
should know more about LNG?
Marco Polo, Oil & Gas, Sembcorp, SembMarine, Stocks