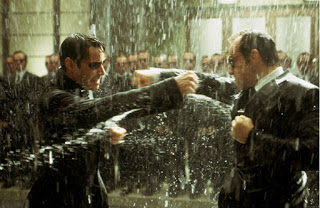 This post continues from the previous two posts and is the final series of Rolf’s version of Matrix Trilogy. Are we living in a Matrix? (Part 1) and Finding
the source of the Matrix – The true purpose of life (Part 2)
True purpose of life – People
To rebel against the machine, Neo needs to find the
“source” – the true purpose of life. The true purpose of life has a strong
correlation to the “power of love”
and the “need for a good cause”. More
importantly, it should always associate to “People”.
Specifically, helping
and not harming people around us.
Dr
Richard Teo
Thanks
to CW8888 blog’s earlier, this view of true purpose of life was reverberated by
the late Dr Richard Teo’s philosophy just before he died at the young age of 40
from lung cancer. Refer to Dr Teo’s blog here.
“True
joy I discovered comes from interaction. Over the last few months I was so
down. Interaction with my loved ones, my friends, my brothers in Christ, my
sisters in Christ, and only then was I able to be motivated, able to be
uplifted. To share your sorrow, to share your happiness – that’s true joy.
And
you know what makes you smile? True joy comes from helping others in hardship,
and because I’ve gone through this, I know what hardship entails. In fact,
there’re some cancer patients who tell me a lot of times, people come up to
them and tell them, “Stay positive. Stay positive.” Yah, right. You come in my
shoes and you try to stay positive! You don’t know what you’re talking
about!”
“Everyone knows that
they are going to die; every one of us knows that. The truth is, none of us
believe it because if we did, we will do things differently.” – Dr Richard
Teo.

The cause and effect “因果” of Matrix
For
every cause there is an effect. In mandarin, we called it “因果” which is also a
Buddhist concept of Karma. I had earlier also written a post on “Everything
happens for a reason”. Refer link here. In fact this philosophy was incited when LP
commented on my Matrix part 2 article. He quoted:
“how do you know what Adolf Hitler is thinking? Actually
if he didn’t do what he did, all the Jews around the world won’t get to go back
to their homeland and have a country of their own (Israel). Everything is
linked and everything is connected. Someone got to be evil then good will
flourish. If you see things over the years and trace the roots of their
origins, then nothing is really evil or good.”
Furthermore
if there is no Hitler, there will probably be no World War II. Then the Americans
may never recover from the Great Depression or the Europeans and
Japanese will probably not learn from the sufferings of war, to be successful over
the next fifty years after the war. Some also believe that natural disaster is
an act of god to create balance? In one of New York best sellers “The nine
Harbingers” book, author and Rabbi Jonathan Cahn attributed the 911 twin towers
attacks as a consequence of “The Breach” from the covenant United States has
made with God at the time of its foundation.
Consider the Architect, the creator of Matrix who invented
a system that is far from perfect, which may eventually lead to system crash. To
salvage the situation, Neo was created for reason to reboot the Matrix if it
crashes! Neo was created to save the Matrix and ironically he is the reason of the revolution.
Help ourselves first
In
order to help people around us, I think it is imperative to “help ourselves first”. Once we
become capable, we will then be able to help people around us, for them to
extend their help to others.

This analogy is the same on a plane during emergency. We are always told to
first help ourselves with the oxygen mask before helping the children or people
around us. Likewise for parenting. If the parents themselves do not have
the knowledge or right values, how can they inculcate their kids properly?
For
most times, the drive for success starts for selfish reasons of personal
success, but eventually it can turn out to be good to help people. For
instance in the beginning, you start a business with the main motivation of
getting rich and the strong desire of not working for anyone else. That is
nothing wrong. Essentially you will be doing lots of good, by helping first
yourself (by being rich) and then people around you via jobs creations, and
even better to help the needy via charity.
In fact the theory of acting first
for our self-interest then others is made famous by Adam Smith, label as the Father of Modern Economics (1723 to 1790).
In Adam Smith’s Wealth of Nations book
he asks ‘what can a person do that is best for his country?’ Smith
decides that if every person does what is best for himself and his little
circle of family and friends, then the country will do better. This is because
every person knows a lot about his own situation (what he needs, what he wants,
what works and what does not work), much more than the government knows. This sort of thinking is called “liberal
theory”, a main part of liberalism.
“It is not from the benevolence of the
butcher, the brewer, or the baker that we expect our dinner, but from their
regard to their own self-interest. We address ourselves not to their humanity
but to their self-love, and never talk to them of our own necessities, but of
their advantages”
“Individual Ambition Serves the Common
Good.”
Adam
Smith
Tougher than all obstacles
It
will not be an easy feat to get out of the Matrix if you are not the selected
one. Even if you are the selected one, you will meet with many obstacles and
distractions to defeat you. Just like in the movie, Neo and Trinity fighting
against Agent Smiths!

Sometimes, at certain point in life, you seem to be heading out of the matrix, but only to
be gravitated right back into the system. For example after you attended an
inspiring course, or read an inspiring book, there is a blaze of fire deep
within to pursue your true purpose of life, only for the flames of motivation
to die out days or weeks later. Or perhaps the pursuit of true happiness is
blocked by a series of tough challenges that you eventually bow out to it and
give up.
Agent Smith after being defeated in the first
series of the “The Matrix”, refused to be deleted, and is now a rogue program
in “Matrix Reloaded”. Agent Smith is stronger now and is able to clone himself
using humans in the Matrix as host. Smith even has plans to conquer both the
Matrix and the real world.
To defeat
the agents, you need to be tougher and more skilful than them. It requires
focus in your TRUE purpose of life! Together with discipline, hard work and
perseverance, you should eventually be able to defeat agent Smith!
Ultimately,
the biggest enemy is not Agent Smith, it could well be YOURSELF!
Nothing wrong to be
successful and wealthy
It can
be common belief to some, that living a simple life with little wealth is true
happiness. Yes it can be, but it’s also not always true in today’s society. The
absence of wealth can very well be the cause of many cases of family
unhappiness. This I can vouch from my own experiences when I was young.
There
is nothing wrong to be successful and wealthy!
While money can be the root of all evil, when deploy correctly, it can
be one of the greatest means to help those in need. Just look at the world’s wealthiest people devoting their wealth and time in philanthropy. For e.g. Bill Gates, Warren
Buffett, Mark Zuckerberg, George Soros, Ray Dalio, Carl Icahn, Michael
Bloomberg, Elon Musk, Jack Ma, Li Ka-Shing etc. Many wealthy people have
already committed to The Giving Pledge, which is a commitment to dedicate majority of their
wealth to philanthropy.
Purpose
in life and money are often inter-connected. Find the purpose of life to create
something that can help mankind, you become rich one way or another. That
said, once you have all the money in the world, it is advocated to stop
continuing to want more. It’s time to give back!
Next mission of life
Once you
are financially freed to a great extent, perhaps it’s time to chase after
non-wealth, or non-material related mission. Most truly enlightened successful
people after retirement from the business world will start on their next
endeavour. It is the mission of improving the lives of the people around them. Just look at Bill and Melinda Gates devoting not just
their wealth on charity, but their time! Look also how Singapore’s
founding PM Lee Kuan Yew chose to step down in 1990 when he is still able and
energetic, handing the baton to the next generation, while he stepped back to
play a mentoring role. My ex-boss who after selling his business for more than
a hundred million, is now very devoted to serving god to help people around
him. While he still spend time in his new found business in Hotel ownership,
most of the time and energy is devoted to helping people around him.
On the
contrary, I seen/heard so many real life businessmen, after selling their
businesses to be filthy rich, dive straight back into the same business world
again. It is perfectly fine to create another business which essentially means
helping the economy with more jobs. But while money is
no longer an issue, the motivation is now the desire to satisfy personal
glory/ego yet again! And people in this group will continue to devote all their time and
energy to satisfy their thirst of “success”!. The question is “When is it going to
end?”
The
Finale
Perhaps
it is the unawareness of the Matrix? Or perhaps it is the choice of staying in
the Matrix? Afterall why not stay in the Matrix, if life is good?
To Neo, it is about love. It is about the desire to
defeat Agent Smith and to use him to exchange for PEACE of Zion with the Sentient
Machines. It means to the extent of giving up his life!
“Mr.
Anderson welcomes back……”

Be…
“Enlightened”!
This means…

“Finding the
true purpose in my life”!

To be associated with…
“Helping myself then the people
around me”.
Ideally,
this purpose should be carried out…
“Without neglecting the time spend with
loved ones around me”,
And
also to possess tremendous knowledge, hard work and determination to…
“Overcome all the obstacles facing
us”
Finally,
with exceptional physical (health) and mental strength…
“Decipher the codes of the matrix
and defeat Smith!”
And more importantly…
“Defeat the enemy within you!”
You have a choice – To be within the Matrix or to be
unplugged?
Peace between the
machines and the people?
“I do not know, but I believe… I
believe!”
Tags: Personal Development