What Is The Fuss Over Fed Rate Hike And Its Impact On Us?

September 20, 2015July 31, 2021 Rolf Suey
Just
what is the impact of Fed rate hike? Why the hoohaa over it? Job is still
intact, life is still as per normal, nothing really change? True? 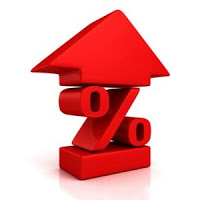 Refer
to my previous article on interest rate here.
Interest
rates at zero percent. Isn’t it good?
So
Fed keeps interest rates at zero percent, isn’t it a fantastic thing. I can
continue to enjoy low debt repayment, so that I can spend more!  But
how come people are worry and stocks did not rally after the announcement of no
hike?
One
reason is because Interest rate has floored for seven years. The low interest
rate is viewed as a lifeline support to keep the economy healthy since the deadly
GFC. Now that the economy has recovered, shouldn’t your lifeline support be
removed? If it is still at zero, does that means that the economic health is
still as bad as seven years ago?
To
understand why low interest rate environment is not sustainable forever, we also
need to understand how the economy works.
Using
Ray Dalio’s concept to explain
Lately,
I researched a lot about Ray Dalio, the head of the largest hedge fund in the
world.  I listens to him explain about
how his economic model works. Each day, I spent hours on his
articles/videos. I must confess, I kind of idolize this guy! His views resonate
within me. I also like his transparency and sincerity during interview.
Eventually it’s all about my gut feel and intuition that tells me that he is a
great guy. Never mind if I am wrong.
Refer
to my earlier article on Ray Dalio video of Economic Machine here.
For
now, I will try my best to use Dalio’s model to convey why Fed’s rate hike has
an important impact to the economy and hence our lives. If anything incorrectly
explains, do correct and pardon me. To understand Dalio’s economic
machine, it is paramount to first understand the three main forces of the
economy.
1)
Productivity 2) Short-term debt cycles 3) Long-term cycle
The
economic machine model explains that many transactions make up a market, and
multiple markets form an economy. In a transaction, one person’s spending
is another person’s income. You can spend either by cash or credit. If you
spend by credit, then the lender has an asset and the borrower has a liability.
If the credit is repaid, the transaction is settled. 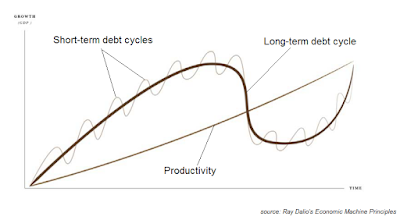 Productivity
Without
credit, an economy can only improve when productivity grows i.e. GDP growth over time is almost linear as shown in the chart above. Productivity
growth means, we can produce more output (goods and services) in an economy for
the same input. For e.g. it can be due to technology, more efficient systems,
or people becoming more savvy or hardworking etc to raise productivity. Now you
know why Singapore government advocates Singaporeans to raise their
productivity.
Short-term debt cycles
When
there is credit, the economy creates what we Dalio described as the short-term
and long-term debt cycles. The short-term debt cycles normally happens
once in every 5-8 years. It is also known as business cycles. During the short-term
debt cycles, government can use monetary policy such as interest rates, money
supply (or printing money a.k.a Quantitative easing) to inject the economy.
During
the GFC, Fed lowers interest rate to zero percent to stimulate the economy.
People and businesses can borrow more, so spending increase. And because
one’s spending is another person income, income also increased. Imagine you are
earning 100k and can borrow 10% of income i.e. 10k. Now you can spend 110k. It
means another person who is earning 110k can borrow 11k. He can then spend
121k. This effect spirals up and spending grows, hence economy improves.  On
the contrary if the spending becomes higher than income growth, there will be
inflation and central bank will increase interest rate to deter spending and
the spiral goes in the opposite direction.
Long-term debt cycles
This
normally takes place once in every 50-75 years or more. The last one was seen in
1929-30 during the great depression that causes a “lost decade”, before WWII
set in.
In
a zero rate environment like today, debts are mounting in many countries. Today
there are a lot more debts than actual money in the US economy. US owed more
than US$16 trillions and has a Debt to GDP ratio of 300% or more.

So
why bother about the increased debts? Just keep interest rate low and ignore
the debts and we all will continue to enjoy the prosper of the economy. Is this
true? Not quite!
In
a zero percent interest environment, there are no incentives to save or to
repay your debt. You will spend on goods and services or financial assets.
Asset price will rise. This is why stocks and property prices had rally since
the GFC. Once asset price rises, yield will become lower for the same asset
investment. Investors will then relocate resources to buy other assets with
higher yield which is more risky.
You
may think that the economy is good. But the reason is due to cheap credit and
may not exactly due to productivity growth.
Consider
also that most of the money in this world is concentrated in the hands of the
few percent rich. There will come to a point when the rich only spend on more
financial assets rather than on consumer goods and services. This means that
the increase spending is misallocated. Despite debt continues growing in the
economy, businesses demand are not keeping in pace.
If
debt grows at a rate faster than income, then the burden will become
increasingly heavier. People will come to a point that they have difficulty
servicing their debts.  Spending will decrease.
And since your spending is another person’s income, lesser spending means
lesser income for another person, so on and so forth. Eventually the debt
bubble burst and economy spiral down rapidly.
Interest rate cannot reduce anymore
And
because the Fed can no longer lower interest rate since it is already zero
percent, they cannot stimulate spending anymore. Everyone will just rush to
sell their assets. Supply outstrips demand. Debts are written down, people and
businesses declare bankrupt and jobs are cut.  This is what Dalio classify as long term debt
cycles. It last happened more than 80 years ago during the great depression. The
world economy did not turn around until when WWII started in 1939.
Maybe Fed can raise taxes on
rich or print more money?
There
are two ways a government can have money. Raise Taxes or borrow from the
Central Bank. The central bank will then prints money and buy government bonds.

When
economy is filled with debts and recession already takes place, the government
can only tax on the rich to re-distribute wealth. Will the rich be happy? No! The
poor will continue to leave on social benefits. This is not sustainable.

Printing
more money, which is what Fed has been doing? With more money around, your
existing money will worth less. This is the effect of inflation, which decrease
your purchasing power. In extreme cases, money will become worthless just like
during WWII when Japanese print so much of their “banana notes” that causes
hyperinflation. Another example is in the late 1970s when the Fed kept interest
rates too low for too long because it feared that higher interest rates would
be economically harmful. That produced double-digit inflation that created
chaos for many Americans.
Social unrest
When
cost of living increase, debts unable to be repaid and have to be written down,
delayed or with lesser interest repayment, it is going to be painful for
everyone.  The poor will resent the rich
and social unrest will take place. In extreme cases, just like in during the
1930s great depression, it can even lead to people like Hitler coming into
power and lead to war.
Deleveraging
When
debts are abundance, an economy needs to go through a process of deleveraging. Typically,
an economy can deleverage in 4 ways.
1)
Debt reduction which means write down debts! One’s man debts is another man
assets, hence this may cause negative wealth effect which can painful also.
2)
Austerity measures which means cut spending and pay down your debt. But it will
mean lesser spending and lesser income for others, which is deflationary in
nature.
3)
Tax the rich and redistribute the wealth from the rich to the poor. Just like
in Europe, wealth is currently redistributed from Germany to Greece, southern
European countries. Ultimately, it will reach a point where the rich will not
be happy anymore to redistribute their wealth.
4)
Lastly, debt monetization or print money. But all things being equal, more
money means inflationary and the cost of goods will increase and causes social
unrest.
Therefore
“Printing of Money” if printed in the right amount and right rate, it will
result in what Dalio described as “Beautiful Deleveraging!” This is what happened since GFC in the US economy.
Beautiful
deleveraging is when inflationary measures balance deflation. Basically
interest rate cannot be higher than inflation. This is to ensure income grow
faster than debt to pare down the debts in a deleveraging process.
Can
the Fed continue to deleverage beautifully? For now, it seems that they still
cannot deleverage (i.e. no rate hike). Fed cited external environments effects
from emerging markets and China slowing, but some suspect US economy is still
fundamentally weak.
So
now we probably know why increasing of interest rates is actually a good sentiment. This is because it represents that the economy is improving and moving in the right track to
deleverage. No rate hike for now can mean that the economy is still in bad shape and
Fed is cautious. This is even in the face that the recent rate hike is only targeted at 0.25%, which
is considered extremely low.
Rolf’s Thoughts
For
now, it seems certain that there are more uncertainties ahead.

Prolonged
periods of low interest rates encourage risky and unsustainable
investments and in general are not healthy. Due to the historical high debts US
is currently incurring, many reckon that they are near to their long-term debt cycles
now. And if there is a downturn, they will have no more interest rate tools to
rectify the situation, and it may lead to financial catastrophes!  If depression really takes
place, it can be even more disastrous than that in 1930s. This is because the world is
more interconnected today than 80 over years ago. Singapore will not be spared
due to our open economy!
It is so
scary and I sincerely do not want that to happen in my lifetime, and neither my
children’s lifetime. That said, many unexpected events take place since my adulthood For instance, 911, SARs, GFC, the current oil crisis!  Nonetheless, each time I learnt and become stronger.
So what should
I do now? Fret and prepare to meet doom?
Absolutely
NOT!
To me, it is all about “AWARENESS”, and nothing to do with pessimism, unnecessary worry and
complaints. With awareness, comes
preparation. With preparation, hopefully my family will be able to withstand the
shock when unexpected crisis take place.
Moreover I
am more known to people around me to be positive and take charge in my
own life with actions. For now, I will be prudent, but carry on my life as
usual happily. I will approach everyday as it comes, with a healthy mind and body. More
importantly I will cherish each moment being together with my loves.
Interest rate, Investment Skills, Ray Dalio

11 thoughts on “What Is The Fuss Over Fed Rate Hike And Its Impact On Us?”