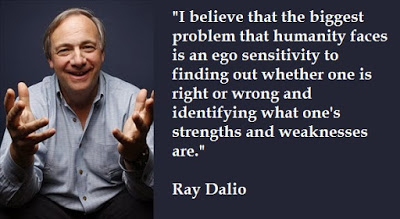 Ray Dalio is the founder of one of the largest macro
hedge fund firm Bridgewater Associates which has approx. US$169 billions today.
The company serves institutional clients including pension funds, endowments,
foundations, foreign governments and central banks, rather than private
investors.

Transparency
Bridgewater embraces a corporate culture that
encourages transparency and the elimination of the decision making hierarchy! For
example, excerpts from Wikipedia;
Dalio
encourages employees to do “whatever it takes to make the company
great” and emphasizes transparency and openness in its decision making
processes. All meetings are recorded and can be viewed by any employee, as long
as the meeting topic is not proprietary.
Rolf’s Thoughts
Dalio company’s culture, at a glance suit me a lot. I
love transparency in speech “in an intelligent and non-egoistical manner”, in expressing
what I truly belief and yet constantly accepting constructive comments for
things that are beneficial to onself – Absorb, Adapt and Accelerate!

Akin to writing a blog, transparency attracts criticism, debates, attacks on specifics etc. That said, as far as I am concern,
this is how we learn! However transparency must not mean insults, criticisms filled with anger, or just to satisfy one’s big ego in an irresponsible way. Transparency will not tolerate ulterior motive with aim of benefit oneself at the expense of others too!
123 Page Handbook – Principles
Dalio also self-published a 123-page handbook in his
company, called Principles, which was distributed to all his employees. Refer
to the handbook
here. Being so transparent and having a bizarre culture led to criticism with
many labeled his company culture as “Cult”. In an interview (refer to video link here),  Dalio countered that Bridgewater’s culture is
instead the exact direct opposite of “Cult”.  He
said:
“Do
not believe in anything and now THINK FOR YOURSELF about what is true together,
but we cannot start that with ego, we can’t let that barriers stand in our way,
so we going to live in a culture to which we can do that!…Now that is the opposite….It is a belief system, in other words, I will ask you do you believe that we should operate this way with each other…It is the opposite of Cult…It means Think, Speak up, Don’t Hide it, Don’t talk behind people’s back…”

“when
people disagree and you can take forth people disagree, you have then the
potential of learning a lot. If people who are disagreeing can say why we are
disagreeing and work through that conversation in an intelligent way to try to
find out what’s true, you can learn, you can make progress, it can be a
fabulous thing!”
Rolf’s Thoughts
I am going to read the 123 page handbook next! “Think for yourself – to decide 1) what you want, 2)
what is true and 3) what to do about it. …No ego!”. I simply quite love it (yes that’s me, the self-believer!). Then I will drop my ego, drop the generation gap, drop my “pants even” (haha) and fail, then acknowledge my mistakes, and start learning from each other! Fail, Learn and Forward Faster!
The Economic Machine
Dalio also shared
his “investment secrets” and economic theories via a 30-minute
animated video which called it “How The Economic Machine Works.”

Rolf’s Thoughts
I watched the video and it is a simple and individualistic
way of defining Economy. For all we know, an economy is of course not as
simplistic as it is showcased here. Nonetheless, in my opinion, it is very interesting and commendable on the effort. It does not matter if it is absolutely correct or not, or if I
think it is correct or wrong! It is the thoughts running through “My Own Mind”
that counts!
Tags: Economy Ray Dalio

2 thoughts on “Ray Dalio – The Man Behind The Economic Machine!”