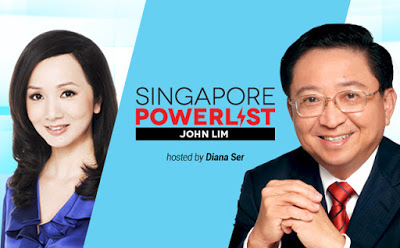 I attended the Invest
Fair last Sunday with the primary aim of seeing and hearing John Lim of
ARA. This is main event of the day where Diana Ser is the Host and John
Lim as the speaker. I had blogged about John Lim earlier. Refer link here. Seeing John Lim in
person, and hearing his speech is no difference from what I blogged about him
earlier. Honest, down to earth, humble, non-pretentious despite his status of
today.

John
Lim’s Investment Philosophy
John
Lim’s Life Philosophy
When asked why Li Ka-Shing choose
him? Lim said he does not know, but maybe he is honest and uphold his integrity.
In his life, he always maintains this
principle:
“已所不欲，勿施於人” which means “Do
not do to others what you do not wish others to do to you (Confucius)”
John Lim’s
Entrepreneurship
Lim cited an example that “Many
young entrepreneurs of today, who just set up cafeteria is not really considered entrepreneurism!”

Entrepreneurship is about:
Lim said he wanted to build a company
not just to make money but one which can be sustainable for a long time even
if he is not around anymore. He is very passionate in his job and will
work as long as he is possible to carry on working. Lim also believe that
eventually, a sustainable business needs to be professionally managed.

For ARA, the motto is: “investors first, shareholders second, and staffs third.

About Reits
For Most of the speech, John Lim
focus on promoting Reits to the local retail investors. Some Q & A as
follows?
Q: Views on Interest Rates
Increase
John mentioned that never in his more
than 30 years career has he seen interest rate so low for so long. This is to
say, almost everyone in the financial market already knows that interest is
going to rise and Reits is going to be affected adversely, way beforehand. Therefore
it seems that for most of the Reits, the pessimism is already priced in.
Q: E-Commerce threat to retail Reits
Yes, he agrees that you cannot ignore
online commerce impact, but he believes retail Reits will evolve over
time. For instance, Suntec after AEI, has
more F&B rather than retail. And maybe over time, retailers may work
closely with e-commerce owners to come out with a win-win strategy.
Also while online market purchase is
convenient, people still require a place to meet their friends, to eat, family
outing etc. He said “You cannot do your massage or manicure online
right?” Hence maybe retail Reits in future
will cover more F&B, education, entertainment, body relaxation, etc
Example: Many years ago when VCD was introduced,
he mentioned people told him that Cinema business will be badly hit. But he
quipped “Look at the queues at GV today and the price of tickets they are
charging!”
Ultimately, it’s about keeping up with
changes and transforming the Reits businesses accordingly.
Q: Reits cannot keep increasing rents
right. Then how to grow?
John mentioned that Reits have to
diversify and transform within itself.
Using an example of Carrefour
Supermarket in Suntec.
Let’s say that Carrefour Supermarket
many years ago signed agreement at $4 per sqft for 100k sqft for 12 years with
Suntec. Not only the rent is cheap back then, Carrefour also occupied the prime
areas of Level 1 in Suntec.
For some reasons not mentioned to the
public, he further said that Carrefour vacated. Today, Suntec rented only it’s basement
floor to Giant Supermarket at double the rent. In effect, even at this price,
it is still reasonable for market standard. Yet, now areas at level one can now
lease to as many as 25 retailers or more, at $10-15 per sqft.
Other growth areas, includes
venturing overseas, just like Suntec’s acquisition of Pacific Highway Tower in
Sydney.
Q: What is ARA acquisition criteria
for Reits
ARA will use commonly the below 3
criteria
1. focus of the business of the
Reits
2. Yield accretive
3. reasonable valuation (most
impt)
For example, Suntec initially wanted
to own all towers of MBFC. However, eventually it was decided that they only bid
to own one tower. Reason being the price is considered to be too high for them
at that time.
Rolf’s Final Thoughts
The face to face session with CEO of
ARA further fortifies my confidence in holding on to the shares of his
company.
PS: At time of writing, I own shares
in ARA.