Fujian Trip (Part 1) – Down In the Dump, but Feels Touched

June 1, 2015July 31, 2021 Rolf Suey
Two weeks ago, I was off to China Fujian for work. The place I visited
is Fuzhou, the capital city of Fujian. My last trip to Fuzhou was
about three years and the city did change so much for the better. What is obvious,
is you can see more high-rise new buildings. The less obvious and more surprising
change, is there are more parks that promote healthy lifestyle for the Chinese people.

About Fujian
The name Fujian came from the combination of two cities Fuzhou
and Jianzhou. The province has approx. 35 mil population, with
the largest city Fuzhou having 7 mil people. Another important city within
Fujian is Xiamen, which has one of the most developed economies within China.
Fuzhou and Xiamen are also found in top 10 Chinese cities for best air
quality. 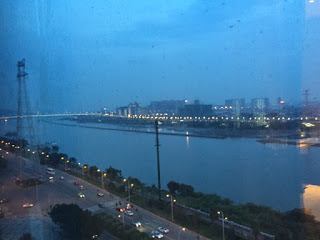 View from the Hotel Room

Down In the Dump

It’s been little time for family and myself lately. Traveling on a Sunday afternoon
does make it worse. To inflict more pain, there were flight delays to/fro
and I was seriously ill during the trip. The first night of arrival, I was
bed-ridden by countless times of diarrhoea and vomiting. I am quite
certain it is not the hotel food, instead blamed it on my greediness and the
combinations of food I ate for supper. It was absolutely disastrous! I had to
forgo the morning meeting with my colleagues taking over. This is one
meeting that I really wanted to attend.

Stay Positive and You Can Rise Out Of Dump Fast
Stay Positive & Discipline
Despite my illness, I keep telling myself to stay positive and
be discipline on my food selections and drink plenty of liquids. Carrying my
weak body, I continued with the afternoon meeting but skipped the dinner with
Chinese clients. I survived for the first day! I not only survived but recovers
fast on the second and third day!
Caring Colleagues & Driver
My speedy recovery was aided by so many nice and caring
people around. First, my colleagues were constantly asking if I am feeling
better. They even re-schedule the afternoon meeting to a later time, so that I
can have an hour additional of rest.
Then our Chinese driver, upon knowing I am ill, was so kind
to drive me to pharmacy to buy medicines. While I was very appreciative
for his kind intention and bought the Chinese-branded medicines, I did not
consume the medicine. When asked what the usual past-time is for Fuzhou people
over the weekends, the Driver says exercising! He cited badminton, jogging and
strolling along the parks. “People are getting more and more health conscious!”
he said.
Exemplary Service from Hotel Manager
The most grateful of all is for the Westin Fuzhou Hotel manager
Mr. Gao. He who visited me at my room when knew about my illness,
also later brought me porridge, bananas and ordered his colleague to help
me buy glucose water for the prevention of body dehydration. 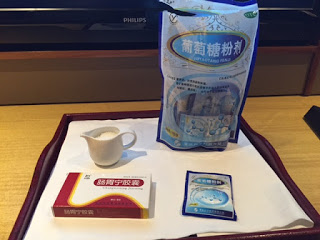 Furthermore,
Manager Gao also dialled several times to check on my health status and offered
help each time! All was free of charge, but what it matters most was the
effort from the heart. This, I can tell and sense! I wrote a long letter of
commendation to Manager Gao, before I checked out.

For a big nation like China, it is undeniable that they still
have a long way to go before being a truly developed country. It is not only economical
or wealth success, but also placing emphasis on developments of personal etiquette
and good cultures of the people. At least a lot of my European or Brazilian
colleagues have lots of qualms about the future success of China, after being
cheated during their visits here.
Having said that, the one thing I like about China is not how
great the city or the people were, but each time I revisited the same place,
things change for the better!
This particular trip, I was touched by the Chinese.
Despite the illness, dual delays in the flight departures, it
was one of my happier trips after being shown so much care.

There is more surprise when on the plane back to Singapore. I
will write in the next article. Stay tune.
China, Countries, Fujian, Relationship, Travel

4 thoughts on “Fujian Trip (Part 1) – Down In the Dump, but Feels Touched”