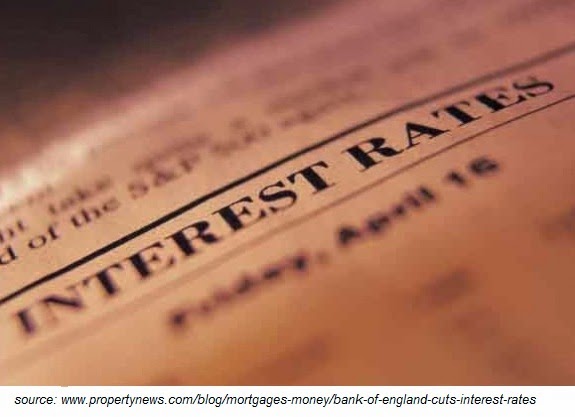 Yesterday my wife asked me how
lower interest rates impact us aside from lower mortgage and lower fixed
deposit rates. Having studied economics in my junior colleague for 2 years and
another ½ year in university, I seems to know, but stumble to explain convincingly. Hence I decide to write a post on this topic.

Lower Interest Rates -> Higher Aggregate Demand
Those who studied economics before
will know that Aggregate demand is the demand for the gross domestic product
(GDP) of a country, and is represented by below formula. In general AD
represents the GDP of the country without taking into account inflation.

In theory, with the
increase in C&I and (X-M), AD will also rise, thereby increasing the real
GDP of the country. However it is not necessarily true, especially in times of
global recession.

May Not be True
In times of Global recession,
Lower Interest Rates -> Inflation
In general where the AD curve meets
aggregate supply, it determines the current level of prices and the employment
of resources (real GDP or real output).
Refer to graph below. If AD
increases, the curve it shifts to the right. Real output will increase. But price
level will also increase i.e. inflation. 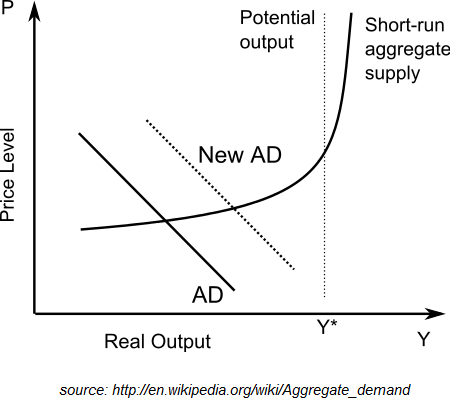 In layman terms, it is not difficult
to imagine that increase spending in consumer, investment and export expenditure
will drive the prices of good and services up.
Who will Benefit in general
Note however that Singapore has no
external public debt as a country. China while having high debt is net
international creditor.

On the contrary, US leads in the world with ~US$18
trillions of debt (106% of GDP), follow by UK with ~US$9.6 trillions (406% of
GDP). Refer to wiki here for list of countries by external
debt.
Note: 1000 Billions = 1 Trillion
Who will Suffer in general
Impact on Current Account

Current Account Surplus = Export
> Import
Current Account Deficit = Export
< Import
As discussed earlier, lower interest
rates will devaluate local currency. In turn, exports are more competitive and
export demand will increase i.e. X > M, which means current account will
improve.
Good?
This is only true if the export demand
is relatively elastic. Not in times of global recession.
Please note on the other hand, lower
interest rates encourage spending. In doing so, spending on imports increase
and current account will deteriorate if this is true.
Furthermore if the country has huge debt
in foreign currency, the devaluation of its currency will resulted in more debts
in foreign currency. E.g. the depreciation of Rupiah against USD is not doing
Indonesia economy any good, because she has a debt of 26 trillions in USD. Read here.
Therefore there is no certainty how
a country’s current account will be affected positively or negatively by the
interest rates.
Rolf’s Summary

1 thought on “How Interest Rates Impact Us”