September 23, 2014July 31, 2021 Rolf Suey
For my readers, I apologised for the quiet month of blogging.
It is a busy month of flying across the continents! Finally, I am home today after more than
ten days abroad in UK and Brazil. The traveling were not made any easier, with more
than twenty-five hours of air travel single-way Brazil-Singapore not to mention
additional hours spent on the roads and hang around at airport. Instead of snoozing during the travel and wait, I actually drafted few blog articles. Below
is one.
Brief

Earlier,
I had blogged about China titanic advancement in the last decade and why I am bullish
on its long term economic outlook. With this positive appraisal in mind, it is
not surprising that I added a stock counter with China exposure lately. The
company is CapitaRetail China Trust
(SGX: AU8U) “CRCT” listed in SGX, owned 21.3% by CapitaMalls Asia as of end last
year. CapitaMalls Asia was taken private few months ago by CapitaLand (SGX: C31), South
East Asia largest listed Real Estate Company.
CRCT is
the first and only PRC shopping mall REIT in Singapore. It has a portfolio of
10 income-producing shopping malls in six of China’s cities including 5 malls
in Beijing (78% of portfolio) and one each in Shanghai, Henan, Inner Mongolia,
Anhui and Hubei province. Total GRA is approx. 605k sqm with over 70 million of
shopper traffic. All the malls are located in populous areas that are
accessible to major transportation routes or access points. Below are more
informations on the various malls within CRCT including their portfolio valuation. 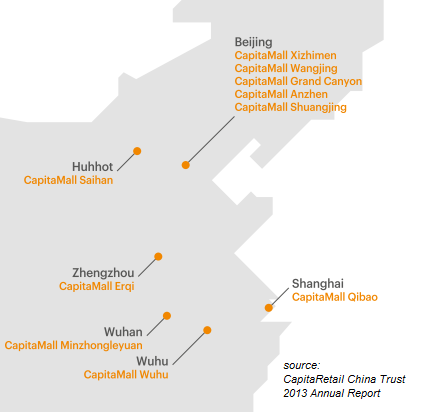 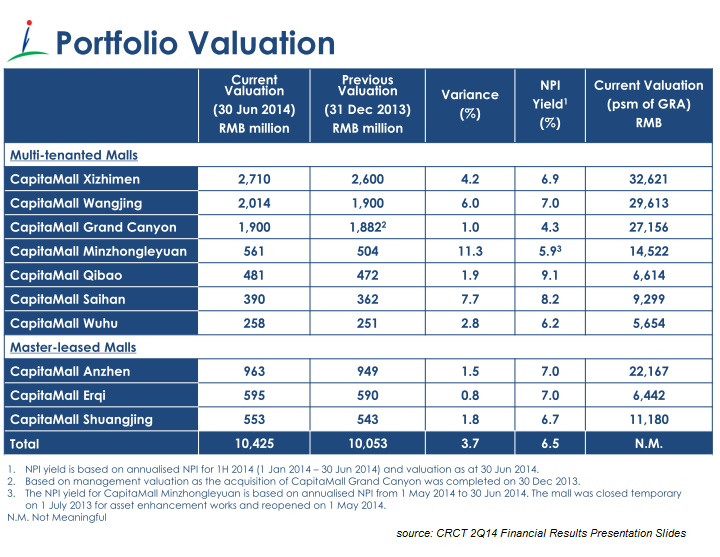 Strong Fundamentals
In
the last 12 months, CRCT stock price range from a minimum of S$1.40 during end
Jan 2014 to a maximum of S$1.70 during end Aug about two months ago. It settles
at S$1.60 currently with a market cap of S$1.3b. CRCT
has strong support from its Temasek backed CapitaLand with healthy fundamentals.
Latest Price to Book ratio is 1.05 with dividend yield of 6.2% based on
annualised 1H2014 DPU of 4.99Sc. Based on 1H14 results, gearing is 29.8% with
an average debt of cost of 3.6% mostly fixed and well distributed for the next
few years. Interest coverage is healthy at 5.5x and occupancy of its malls are strong
at 98% capacity.
Diversified Tenant Base
CRCT
malls have a mix of Master and Multi-tenanted leases profile. Master lease
is of typical 20 years to ensure stable cash flow. Multi-tenanted leases
provide growth and include Anchor Tenant lease which is 15-20 years;
Mini-anchor tenants 5-7 years and Specialty tenants up to 3 years. As of 1H14,
there are 3 Master-Leased malls which contribute 22% of NPI and 7
Multi-tenanted malls accounting for 78% of NPI.

CRCT
tenants include big names like Wal-Mart, Carrefour and the Beijing Hualian
Group (BHG) under master leases or long-term leases. The anchor tenants are
UNIQLO, ZARA, Vero Moda, Sephora, Watsons, KFC, Pizza Hut and BreadTalk.
The two Tenants in the month of Dec 2013 in terms of Total Rental income are 1) BHG
occupies 41.3% of Total committed Gross Rentable Area (GRA) and contributes to
22.9% of Total Rental Income. 2) Carrefour Supermarket occupies 10.7% of
committed GRA and contributes 4% of Total Rental Income.
The rest
of the tenants all contribute 4% or less of the Total Rental Income which gives
CRCT a well diversify low risk spread of tenants.
Potential Upside
Near term growth stems from the recently revamped CapitaMall
Minzhongleyuan mall opened 1 May 2014. Also CapitaMall Grand Canyon mall that
was acquired in 1H13 is also expected to have its NPI raised by end-2014 due to
new lease signed at higher rents. In the longer term, CRCT can tap on ROFR
acquisition of CapitaMalls Asia assets granted by various CapitaMalls Asia
funds.
CapitaMall
Anzhen, CapitaMall Erqi and most of CapitaMall Shuangjing’s GRA are contracted
under master lease, which has provisions for increase of rental revenues
through step-ups in the base rent. In addition, master leased malls also
provide further potential upside through a percentage of tenants’ sales
turnover if the turnover exceeds an agreed threshold. Similarly, most of the
leases for the anchor, mini-anchors and specialty tenants have clauses with
annual step-up in the base rent and include provisions for rent to be payable
at the then applicable base rent or at a percentage of sales turnover,
whichever is the higher.
So
far, CRCT had enjoyed healthy portfolio rental reversion of 24.9% as of 1H14.
Rolf’s View
China
rapid urbanization is definitely going to spur CRCT long term business
prospects.
Having
seen myself and heard from my China friends, well-accessible malls in the cities
are always busy and crowded. People in China love to shop! While the older
Chinese generation are generally savers, the younger generations tend to spend
more relative to their income.
In
view of the growing population and scarce land in bigger cities in China, property
asset re-valuation upward potential is high.
For the record, as of 1H14 compared to half year ago, CRCT’s portfolio
valuation rose 3.7%.
Of course
not everything is smooth sailing. China is anticipated to experience decelerated
economic growth than before, with loan default hard landing problems on the
headlines speculated by many investors. The potential rising interest rate environment
is not making it any easier too for CRCT future acquisition plans.

Moreover, 87%
of CRCT’s Total Rental Income is coming from committed leases with turnover
rent provisions. There will be a danger of sales decline affecting the company
rental income.

Related Posts:
Why
China Today is so Different – My Own Travel Experiences in the Last 10 Years!
Added
– China Merchant Holdings (Pacific) Limited