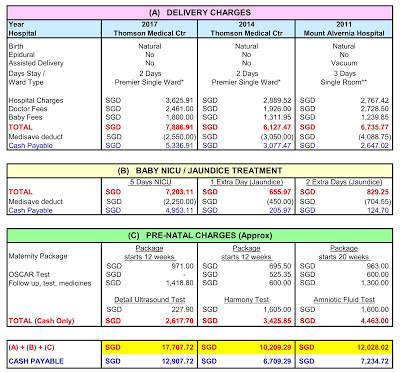 Last month was an extremely joyful day for our family as we have our new addition baby boy. So I decided to compile the monetary cost of bringing him to this world. Refer to my earlier post in Dec 2014 when we had our last child.
Actual costs from prenatal to delivery

Below is a table comparing our 3 of our kids.

Variations in costs
Ward Type / Days Stay
*
TMC room rates – click here
**
Mount Alvernia room rates – click here
My wife
only stayed 2 days in the hospital which is considerably short. In fact, mummy is so healthy
that she is only required to stay 1 day, but we decided to extend another day to
spend more time with baby, who was required to be transferred to NICU.
NICU
By
some strange and non-convincing diagnosis of the doctor, baby is required to
stay in the NICU, which wife and me never really approve on initially. I was definitely not impressed
by the doctors (2 PDs I consulted) and had quite a heated conversation with the
doctors.

Anyway
it is a long story, and by some supernatural reason unexplainable, we heard “voices” that our baby need to be in NICU, so that we can finish what
we were assigned to do there. Me and wife were then so joyful in NICU after knowing
the “truth”, as we conveyed blessings to other parents, babies and nurses in the NICU room.
Monetary
wise, it is >$1000 lumpsum (incl. treatment) in NICU at least. Our baby stayed there for 5 days in total.
My
baby NICU treatment was already considered mild. There was a Filipino parent who I become
acquainted with and given him some encouragement. He was always very gloomy there, because his baby is significantly prematurely delivered only weighing 1kg or so. The estimated NICU stay is 30 days or more with more sophisticated
treatment. And you can also estimate his bill then. Haiz……
Birth Type
We
always believe in natural birth since this is how woman is created to give birth. My wife’s delivery is definitely the cheapest because she had skipped all the unnatural use of operative procedures and all medications.
Test
Due to the “so-called” advancement of the medical technology, there are so many tests since our
last baby. Even daddy need to do blood test, which I refused to do anyway. We
also skipped almost all optional tests including OSCAR test, which will cost much more than our bills.
Doctors’ Fees
Given
the same Gynae as the delivery in 2014, we witness huge inflation of doctors’
fee (~30 to 40%).
Rolf’s Summary
Overall, I expect it will cost S$15k
+/- for prenatal, delivery and pediatric charges in a private
hospital depending on various factors in the present time.
Because of our baby NICU saga, we paid more of
course, but it will be offset by the baby bonus, since this is our 4th
baby.
Inflation is definitely quite absurd nowadays in
hospital. The whatever addition that government is trying to give in bonuses, in my opinion,
is only sufficient to cover inflation. Or probably even not enough, considering
the education fees had all inflated too.
Overall, a cash outlay ranging of S$10K
+/- is expected, excluding all the baby bonuses.

We are thankful
My wife and baby are so healthy now.

We are so thankful. Wife is almost all-recovered now. In fact, her delivery and recovery were all supernatural despite not having all the “necessary” medication. No epidural, no laughing gas, and even no big scream, and within less than 24h, she walks normally and was given permission to discharge. 2 days after delivery, we were already shopping and having cafe and outside food, and she is also bathing everyday since then.

Now, close to 1 month later, she is in perfect health, breastfeeding and taking care of baby by herself.

Baby is as healthy now since he was discharged.
The PD who predicted our baby needing to stay at least 14 days or more in the NICU had to keep the mouth tight, as our baby was discharged immediately after me and mummy finished “what we were assigned need to do there”, which lasted 5 days in total. Both PD and Gynae were amazed by baby and mummy’s recovery.
We are thankful once again.
So,
are you considering having a baby in 2018?
Tags: Healthcare & Education