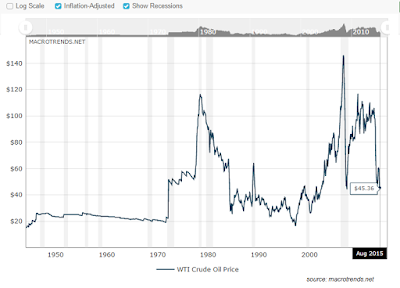 Read an article earlier. I extracted some interesting points as below, which I tend to agree.
“Oil is inherently cyclical business. The point is remarkably simple but
amazing how often it gets forgotten by forecasters and investors.
In 150 years, since modern drilling of Edwin Drake’s well in 1859, real
prices doubled in space of 3 years no fewer than six separate occasions, and halved
on four. If 2015 oil price remained at $50, it will be fifth time. Only 1931 to
1969 oil price is relatively stable. The rest of time is very volatile and
unpredictable.

Any attempt to predict oil prices medium term (2-5 years) and long term
(>5 years) based on current prices or recent changes is bound to fail.
When prices are high and have been rising, most
forecasts predict they will rise even further on increasing scarcity. Whey
prices are low and have been falling, most forecasts predict a further slide on
continued over-supply.
In 2008, and again in 2011/12, as prices were peaking at more than
US$140 and US$120 per barrel respectively, most forecasters were predicting
prices would remain high for a long time or even forever. Not one major
forecaster saw prices sinking back to less than US$60 per barrel but on both
occasions it happened in less than three years.
Now prices have fallen, it seems no major forecaster is predicting they
will rise sharply again within the foreseeable future. But the current
bearishness about the medium-term outlook is no more likely to be accurate than
the former bullishness was between 2008 and 2011.
Forecasters all make the mistake of assuming the medium term will look similar
to the recent past whereas experience shows it will look very different.”
SO STOP FORECASTING OIL PRICE – YOU CAN’T!
Nobody knows where oil price is heading. Not the expert, not you, and
definitely not me! 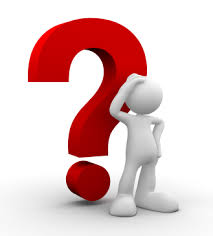 So stop pretending or acting like an
expert to forecast the direction of oil price, merely because you have read articles
on Oil and Gas demand and supply, read about OPEC, Saudi, Iran, Russia or Shale
Gas, Tesla electric cars, alternative, bla bla bla….
If I were you, I will focus on what
we should do now, rather than being overly concerned about which direction the oil price
will swing to.
Be a Visionary
I am doubtful that in my entire lifetime, I will see alternative energy replacing oil as the main source of
energy. Solar energy despite many decades of discussion to replace oil, still remains highly cost ineffective, albeit I confess that technology had been improving slowly over the years.
Correct me if I am wrong, perhaps if
you have small capital and start a business entirely based on solar energy supply
twenty years ago, you will probably already have gone bankrupt long ago. Wind,
water, even shale are all having pretty much the same reasoning etc. Just look
at the shale gas producers a year or two back compared to now.
Having said that, this does not mean
that we should ignore the alternative energy source developments.
We should focus on the “Alternative
Energy” KNOW-HOW and the BUSINESS in itself. Due to the technology advancement
going into the future, if you think alternative energy business is going to
grow, then it will really pay to investigate and invest in it. But be pragmatic enough
to invest in company whose core is not solely on alternative energy. Otherwise they must be a company with financial muscles strong enough to perform R&D, technology improvements etc sustained over a period of time. Normally only state-owned company possess these attributes. Tesla, SpaceX are just few exceptional cases and not every company will have a person of the character of Elon Musk!
For example, it can be electric
cars, LNG, wind, which all are looking to have great potential moving forward. Be
it for your investments, or for your own or your children’s career, you can
start your research into these alternative energy sources now, if it interests you. I still believe over long term, it is your passion over the interest of mere earning money.
Reading up and knowing more now is
better than using our brawn brain cells to forecast future base on history or
charts.
If You Own O&G Stocks, What You Should Do Now?
If the massive declines in your
O&G stock prices have been giving you headache and lose sleep every night, then
for the sake of your health, you better sell those stocks early.
You may also want to sell these
stocks if you are willing to cut losses, and reinvest your capital into other
stocks that may provide better future returns. Do be warned if you own O&G companies that are highly leveraged with poor management, fundamentals, and worst of all insufficient order backlog and intake.
Otherwise if not for above reasons, maybe
you should just be senile about which O&G stocks you owned. Practice inner
peace and have a good night’s rest each day.
Personally I will prefer not to add
anymore O&G shares for now, due to the uncertainty.
Stop Fretting, Focus On What You Can Do Now
If you work in the O&G industry
like me that suffers from the current catastrophic situation, stop fretting!
Focus on the things you can do, such
as learning things you do not already know about your own company or job. Learn more
about the business as a whole rather than just your small segment of job. Over
time, you will become more matured, and it will not only help in your career
decisions, but also decisions in investments and in life too.
Spend time in establishing relationships. It can be with clients, colleagues, suppliers or other business associates.

Unless you are next in the retrench list,
take this down period also as an opportunity to take a break to spend more time
with your family and for yourself.
Related Posts:
Shale Oil & China
Slowdown – Let’s hear from Jim Rogers
Oil & Gas Crisis – Time to Take On More Work Even with No Pay Raise!
Oil Crisis – Did You See it Coming?
Mark Mobius on Oil
Stocks and Dangers for Long-Term Investors
Why Singaporeans
should know more about LNG?
Tags: Career Investment & Financial Literacy Oil & Gas

4 thoughts on “Which Directions Will Oil Price Head? What Should I Do Now?”