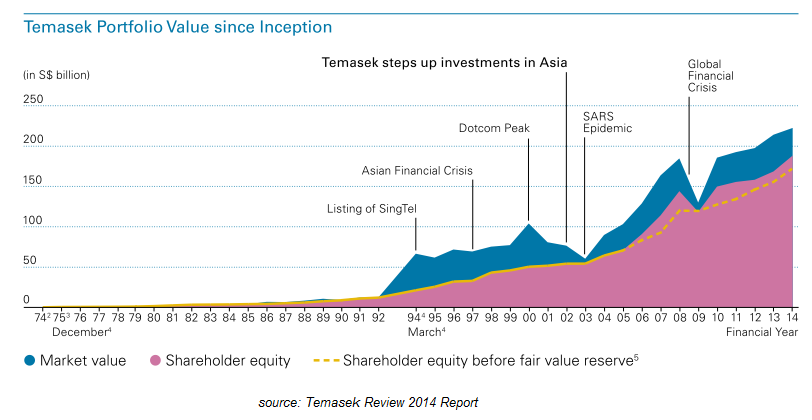 Most adult Singaporean will know that Temasek Holdings is the investment
company owned by the Government of Singapore. It is also well-known that the company
is run by our Prime Minister’s wife Ho Ching operating as the Executive
Director and CEO of the company.
Aside from knowing what Temasek does and who runs it, how much do you
know about Temasek Holdings?
As a Singaporean and avid investor, I feel compel to find out more about
Temasek portfolio and performance. Let us then take a closer look into one of our
country’s largest investment company.
Company Brief
Temasek
Holdings is owned by Government of Singapore Investment Corporation (GIC), a sovereign
wealth fund that manages Singapore foreign reserves. GIC’s assets stand at US$330b.
As many may have
misunderstood, Temasek Holdings is neither a
statutory board nor a government agency. It operates under the provisions of
the Singapore Companies Act and has its own board of directors and a management team. It pays taxes
to tax authorities and distributes dividends
to its shareholder, the Singapore Ministry of Finance.
Incorporated in 1974,
Temasek has many global offices and a multinational team of over 450 people.
This year, it opened a New York Office. Chairman of Temasek is ex-minister Lim
Boon Heng. Temasek owns and manages a net portfolio of S$223b (US$177b)
as of Mar 2014, mainly in Singapore and Asia. Its portfolio covers a broad
spectrum of sectors including financial services, telecommunications,
media and technology, transportation and industrials, life sciences,
consumer, real estate, as well as energy and resources.
Temasek is one of a
few global firms assigned with the highest overall corporate credit
ratings of “AAA” by Standard
& Poor’s and “Aaa”
by Moody’s. It has also attained
perfect quarterly scores on the
Linaburg-Maduell Transparency Index, a measure of the openness of
government-owned investment funds.
Aside from
investments, Temasek is also heavily involved in community and charitable
activities.
Performance
Portfolio
Temasek’s
portfolio grows from S$354m in 1974 to a Portfolio of S$223b
today.  In the last ten years,
portfolio has more than doubled from S$90b in Mar 2004 to S$223b in Mar 2014.

Shareholder
Equity
Group shareholder equity is
S$187b,
up S$122b from 10 years ago. Over 70% of
Temasek’s portfolio was held in liquid and listed assets. 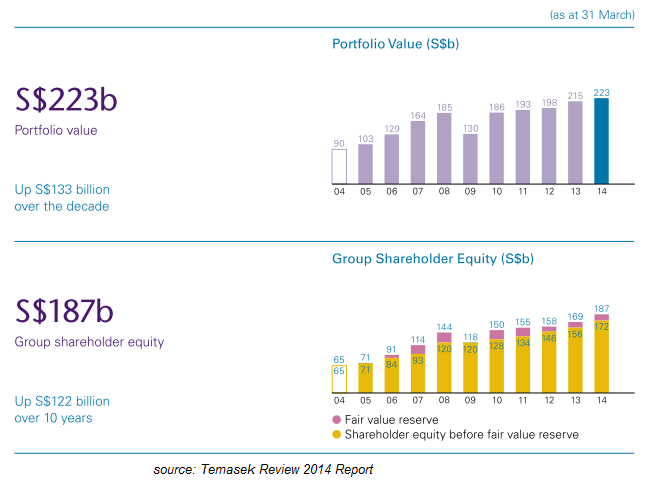 Net Profits
Group net profit in the
last year is steady at S$11b, above group
average of net profit S$10b a year.
Total Shareholder Return (TSR)
TSR in the year is 1.5% in Singapore dollars mainly due to weakness
in key markets in Asia. Compounded annual return over last 10
years was 9%. Longer
term 20 year TSR was 6%. Since inception in 1974, compounded annual return
is 16%. TSR excludes
capital injections from shareholder and includes dividends paid to our
shareholder.
Does not drawn
on Past Reserves
Temasek finance their investments primarily using
dividends from their portfolio companies and divestment proceeds. The company
also claimed that they make sure its Total Reserves equal or exceed its past
reserves, such that there is no draw on past reserve. This includes making sure
that every divestment is done at a fair market value.
Portfolio
Temasek Portfolio comprised mostly equities. The top three
countries in our portfolio, based on the underlying assets, are Singapore, China and
Australia at 31%, 25% and 10% respectively, as at 31 March 2014. Temasek underlying exposure to North
America and Europe grew to over 14%, up from
12% the previous year.

Source: Temasek website
Last year,
Temasek made S$24b in new investments, while divesting S$10b having a net S$14b investments. This is very active and doubles the average annual net
investment level of S$7b for the past decades.
Half of the
investments were in Asia and two-fifths in Europe and North America. In the last 10 years, Temasek invested almost S$180b and divested nearly
S$110b i.e. net S$80b.
Mr Lee Theng Kiat President of
Temasek commented, “Half of our new investments last year were in Asia, as
weakness in the growth markets gave us various opportunities to add to the
positions we like. Europe and North America accounted for about 40% of our new
investments. In absolute dollars, investments into these two regions increased
by 60% compared to the previous year.”
Sectors
Temasek’s existing underlying assets are spanned across six major
sectors.
Taking the lead is Financial Services at 30% of Temasek total portfolio
with major holdings in DBS, China Construction Bank and Standard Chartered each
worth more than S$10b.
Telecoms, Media and Technology come next at 23% of total portfolio of
which more than S$30b holding comes from Singtel’s 52% stake. Major stakes in
other Singapore companies include ST Telemedia, Mediacorp, and STATs ChipPAC.
The company also has major stakes in China Alibaba, India Bharti Airtel,
Thailand Intouch and USA Markit.
The Transportation & Industrial key portfolios includes mostly of Singapore
companies such as PSA, Singapore Power, SIA, Sembcorp, Keppel Corp, NOL, SMRT
and one German company Evonik.
Major stakes in Life Science, Consumer & Real Estate sector includes
Mapletree Investments and CapitaLand with holdings worth approx. 8.3b and 4.8b
respectively.
Energy and Resource portfolio comprise of more than USD1b holdings in USA
Fortune 500, The Mosaic Company, a major producer of fertiliser, EUR2b
investments in Spain oil company Repsol SA, and S$2b stake in our very own
Pavillion Energy.

Source: Temasek website
The top three sectors for investments during the past financial year were Financial services, Life sciences and Energy.
Financial

Summary
Temasek started 40
years ago and had since achieved spectacular portfolio growth from S$354m to
S$223b. This means that S$1k investment in 1974, will be worth S$630k today.

As Singaporean, I am so glad that Singapore started investing in the early years after independence and attained such commendable results. This is definitely an important lesson to advocate individual Singaporean to start investing early as well. 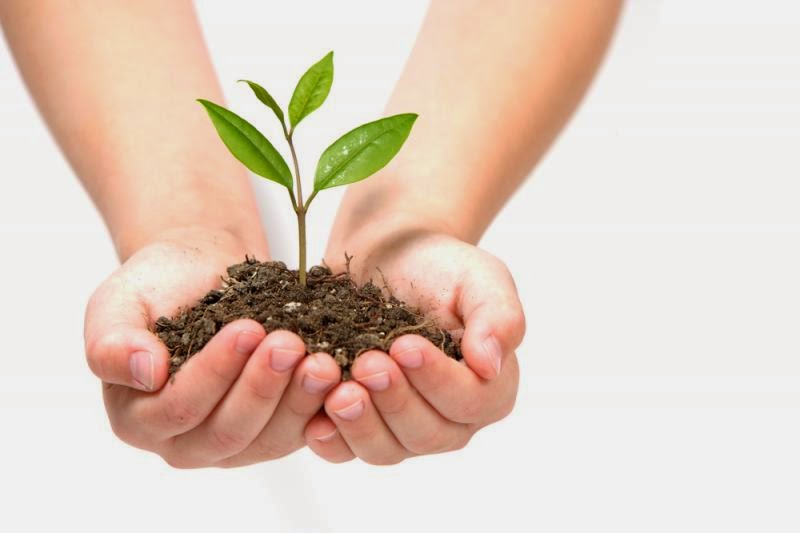 Temasek says that
their journey has just begun. I consider my investment journey also just begun.

How about yours?
Tags: Temasek

2 thoughts on “How much do you know about Temasek Holdings?”