EMS Energy – Soaring with Orders or a Ship Sinking Deeper

May 18, 2014July 15, 2021 Rolf Suey
This week, I am thankful and honored to be included in the Blogroll of
two famous Blog page – Singapore Stock Market News and Singapore Investment Bloggers. Even more gratifying is to hear from a random reader that she enjoy reading my blog. Thank you so much! Thank you!

To make my blog less analogous to most investment blogs, I will try my best to also focus on companies without Institutional analysis. I shall begin today with catalist listed EMS Energy Limited.

Rolf’s View
Acquisition of International Offshore comes as a
surprise, because their product range is similar to what EMS can already
supply. There is no profound synergy. Int’l offshore is established in
2011, a mere three years into a industry that demands vast experiences of
engineering capability and strong track records. In Int’l Offshore, we can neither find strong
clientele nor impressive project references from its listed website.
Acquisition price of 1.67x book value is also considered high for a company that is
relative unheard of in the industry.

To fund the new facility, earlier this month, EMS proposed to raise up to S$14.8m in Net Proceeds via 1-for-1 Rights Issue at price of
S$0.02 per share. If fully subscribed, the Rights issue will double share
capital base to 1.48b shares from 740.4m shares currently. 30-40% of the
proceeds will be used to fund the waterfront facility, while the balance is use
for working capital and to fund its order book.

Rolf’s View
Years over years, EMS had borrowed from either share
placements or rights issues citing future expansion. To date, we have yet to witness and meaningful return to the shareholder, since its RTO of Ecowater in 2007. This time, the
expansion plan is even more aggressive with a facility five times bigger than
its current one. Without a profitable and sustainable business model, it
is hard to wonder how EMS can sustain additional overheads and increase
debts over long term.


Major Orders
The new facility serves mainly for the purpose of a S$45m Drilling Equipment Set “DES” contract awarded by Koastal Industries last
November. What is more promising is the potential of another two more similar
system worth up to a total of S$135m. EMS will deliver the first DES over 18
months to Koastal to be built in a China state-owned Shipyard (“Shipyard”).

Rolf’s View
The S$45m order awarded by Koastal is the largest to
date. It is even incredibly larger than the entire market cap of EMS. Koastal Industries is the biggest shareholder of EMS owned
by Ting, the CEO and Chairman of EMS.

It is worthy to note that there is no mention if Koastal new Tender Rig has already secures
a contract from an Oil Company. We have also no idea who are the exact owners or operator of the Rig. In situation of not having a contract,
the Rig order may well be a speculative one which is highly risk-averse to any unprecedented
events.

We also need to ask if Koastal posses the necessary “muscles” or track records to convince any Oil company to award her a contract. In circumstances that Koastal is unable to secure a contract in time, the Tender Rig project will be delay, which means delay of DES order for EMS. This may prove to be an extremely risky for EMS, having committed to a large facility with huge expense overheads.

EMS Management team had been changing years over years. Over
the last 5 years, EMS announced 14 resignations of key officers. From past year annual report, we note that the entire current management team is also newly appointed. Having a new management team spells nothing wrong, but having one with relatively mediocre experiences and track records may be a cause of concern.

Track Records
EMS is founded in 1977 know as Engineering Marine Services
as a steel fabricator. In 2007 through an RTO of EcoWater Limited “EWL” renamed
itself to EMS Energy Limited. At the same time, EMS venture into a complete new business to provide customized
engineering solutions in the oil and gas sector, taking a big step from its previous straight forward steel fabrication business.

For the DES project, it means that EMS will have to
use its short engineering experiences couple with a relatively new and inexperience
management team to compete with the likes of International companies such as NOV or Aker Solutions with more than 100 years history and Billions in
market capitalization.

The DES is the most important
piece of system in a Drilling Rig. Neither failure nor minor error can be compromised at the back
of a very stringent requirement within the Oil and Gas sector. Whilst it is
only logical for Koastal to award the contract to EMS due to their
affiliations, Oil companies will have to be convinced to hire a Tender Rig from
Koastal that comes with a relative unknown EMS supplied DES.

Order from Related Parties
From figure below, we can
clearly see that majority of the company receivables is derived from related parties out of Koastal in Singapore. The heavy dependence of Koastal in its order book suggests EMS has yet to be  truly recognized as a reputable solutions
provider within the industry.

Disposal of profitable subsidiary
EMS dispose 40% stake in its subsidiary “OSS” in 2013.
If we read the below charts extracted from ar2012, we see that OSS is generating revenue of S$21.7m
with a very healthy gross profit of S$9.2m (>40% margin), compared to a
miserable 2% in “EES” segment. 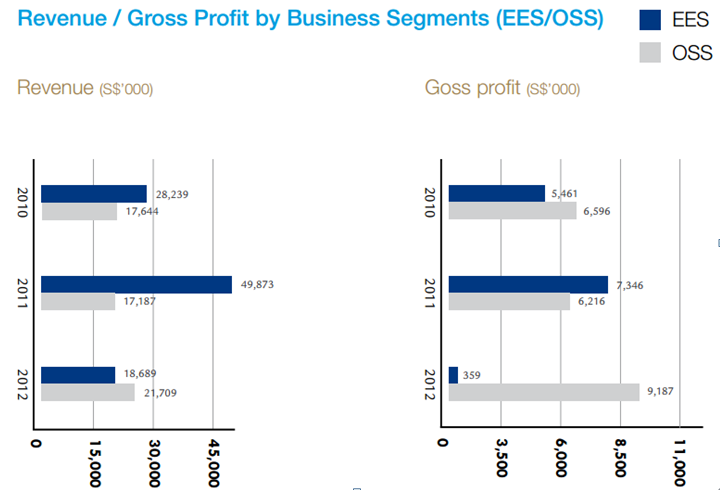 It left us to ponder why the disposal of a highly
profitable subsidiary by EMS. Is it to fulfill a change in business strategy or a
desperate move to clear its raging debts?

Income Statement
Despite a net profit of S$4.1m, EMS incurred
an operational loss of S$3.8m in 2013. This is
at the back of one time gain of S$7.9m from the disposal of a stake in its subsidiary. This implies two consecutive year of operating losses despite the positive
outlook in the oil and gas sector.

Operating expenses continue to be high as in fact staff costs increase from S$5.75m in 2012 to S$7m in 2013 due to
increase expenses in China office.

Balance Sheet
Current and total assets are S$17.7m and S$38.3m respectively. Cash and equivalent of S$3.5m is insufficient to cover the yearly staff cost of S$7m for year 2013.

Current liabilities is S$16.4m which
almost account for the entire liabilities at S$16.6m. The huge current liabilities is worrying, as it require the company
to receive or raise funds urgently to repay its debt. Total borrowings which includes bank overdrafts, term loans, bills payables stands at S$5.8m, out of which S$5.5m is due in 6 months or less.


Instead of mitigating its current liabilities, EMS continue to take on more debts with the leasing of new S$23m facility to fulfill a questionable DES order book.


Trade and other receivables is S$14.1m which is more than 65%
of its total sales revenue of S$21m. YOY receivables had been more than S$10m which exhibit the company inefficiency in it’s cash collection.

Goodwill of S$9.2m from consolidation as a group, remain to be
convinced.

Cash Flow
Net cash from operation activities is -S$12.3m
compare to -S$1.2m a year ago.

Cash from
Investing activities is S$5.56m (1.41m) mainly from disposal of subsidiary offset
by purchase of property, plant and equipment.

Cash from Financing activities is
S$4m (0.46m). This is due to issue of issuance of shares resulting in a gain of S$5.9m, plus new term loans of S$1.8m, partially offset by the repayment of term loans
of S$1.57m and a increase in fixed deposits pledged of S$1.84m.

Other Concerns
EMS recorded its sales using
percentage-of-completion method to account for its contract revenue. This
method of accounting can under-estimate cost captured prior to the delivery
of the project.  This is especially risky
when unanticipated costs occurs at later stage of the project, such as just prior to delivery or after delivery (warranty costs).

Provision for warranty of S$1m is also low considering the complexity of the DES order.