Invest in Companies That Are Sustainable!

Fossil fuels takes millions of years to form, and human race has been using them for just over two hundred years. Experts have estimate that if we keep burning fossil fuels at current rate, depletion may take place by 2060.

The oil and gas is still one of the largest industry today in terms of revenue generated. Oil is the most in demand and hence fastest depleting, and it is NOT sustainable to keep consuming oil.

According to statista website (click here), China has the highest investment in clean energy globally, spending USD83.4 billion into clean energy R&D. The US is second investing USD 55.5 billion followed by Japan at USD 16.5 billion. These three countries account for approximately 71 per cent of the total clean energy investments. 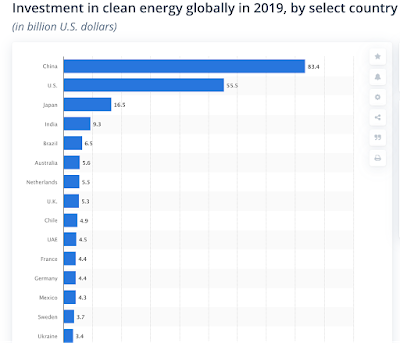 According to a global research, Ørsted  is voted the most sustainable company in the world in 2019. The Danish giant is owned majority by the Danish government. It is formerly known as Danish Oil and Gas Natural Gas (DONG), and has shifted in the past decade from using fossil fuels to renewables and now urges all countries and companies to reduce carbon emissions.

The company has reduced carbon emissions caused by energy generation and operations by 83% since 2006 and aims to be completely carbon neutral by 2025. Its wind farms supply power to more than 13 million people and the company says it plans to provide energy to 50 million people by 2030.

Ørsted is listed in Denmark. Another Danish company is Vestas Wind Systems (VWS), manufacturer and seller of wind turbines that was founded in 1945.

First Solar (NASDAQ:FSLR) – is one of the leaders in developing thin-film solar panels. These larger modules produce electricity at a lower cost per watt than traditional silicon-based panels. They also perform better in hot and humid conditions as well as shed snow and debris quicker. Those characteristics make them ideal for utility-scale applications.

NextEra Energy (NYSE:NEE) – one of the largest utility companies that generates solar energy in the world.

Then there are also General Electric, Siemens, Taiwan Semiconductor etc.

Question: Will you invest in these companies?

2 thoughts on “Invest in Companies That Are Sustainable!”